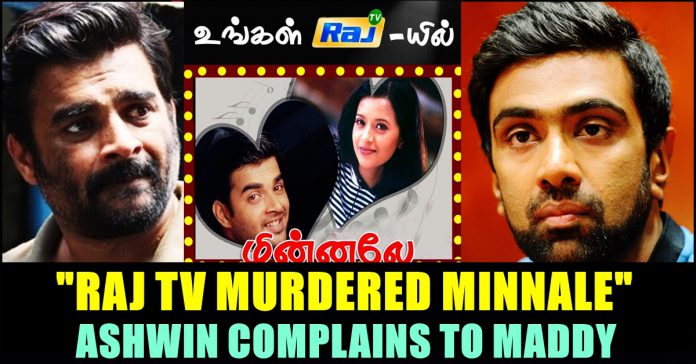 In Reminisce of Ashwin, a show being hosted by Indian cricket player Ravichandran Ashwin in Instagram with celebrated personalities during this quarantine period, actor Madhavan participated for an insightful conversation which lasted more than 1 long hour. Both the influential personalities talked about many things regarding Cinema in India and Ashwin’s thoughtful questions made Maddy to appreciate him for his passion towards watching cinema.

Ashwin said that Maddy justified his role as a cricketer in “Priyamana Thozhi” as many other actors would fake it blatantly. The right arm off break bowler further said that he always liked to watch celebrity cricket league. “I even watch those celebrity cricket matches even in youtube. As far as I saw, the cricket you played is completely fine. You are a bit leg side dominated but that’s ok.” said Ashwin to convince Madhavan that he did well in his movie as a cricketer. They both further shared few things about Krish Srikanth, a world cup winning cricketer who trained Madhavan during the filming of “Priyamana Thozhi”.

While talking about “Minnale” which seems to be Ashwin’s most favourite film of Maddy above “Alaipaayuthe”, Maddy said that the credits should go to Gautham menon who directed the movie. Ashwin went on to inform Maddy about his only disappointment about “Minnale” getting a Television streaming.

“I was studying 10th standard when the movie got released. I used to study and practice maths while watching movies.” said Ravichandran Ashwin who went on to share the most disappointing aspect about the film being telecasted in Raj TV. “They followed a concept named as “Thirai minnalgal” through which they would telecast the film from 8 : 01 PM. They would literally kill the movie with their advertisements. I used to get extreme anger. ‘I was sitting here with an anticipation to watch the movie and you (Raj TV) are telecasting your advertisements ?’.” said Ashwin to express his love towards the movie. “I used to watch the movie on my computer” he added. Madhavan said that he was flattered by Ashwin’s love towards the movie and said to the viewers that the cricketer knows all the dialogues from the movie.

Watch the interaction below from 18th minute :

One of the most interesting parts about the interaction is when Ravi confronted Madhavan and asked him what kind of movies are important for the audience when Maddy said that movies which are becoming box office hits are good movies. “Isn’t it critical to weigh in the responsibilities when you are doing certain few scripts rather than looking at what will sell ?” asked Ashwin to which Madhavan said that the responsibility is always determined by one’s upbringing. He further asked “why people are not learning from a hero who saves a girl from four goons?” to make his statement clear.

Further the duo went on to discuss on many of Madhavan’s movies such as “Rang de Basanti”, “3 idiots” and many other. Madhavan also shared about his upcoming project “Rocketry : The Nambi Effect”. He worried about the fact of Nambi not being recognised by Indian people, especially by Tamilnadu people as he hails from Tirunelveli.

Have you watched their interaction ?? Comment your views on this insightful conversation between two sane men !!