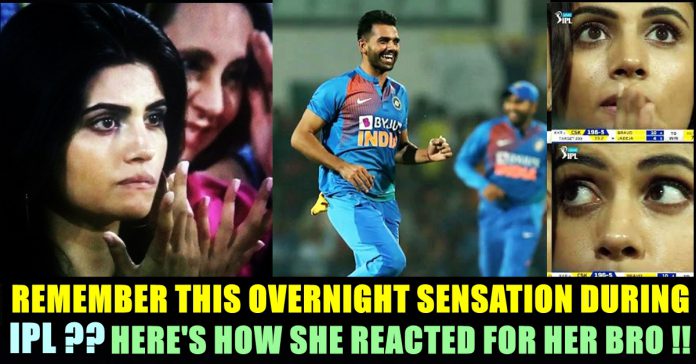 Deepak Chahar blew away the Bangladesh batting order in the third T20I to hand India a 2-1 series win at the VCA Stadium here on Sunday. With the visitors chasing a target of 175, the 27-year-old Rajasthan seamer bagged 6 wickets for just 7 runs, including a hat-trick, from 3.2 overs to return with the best ever figures in the history of T20 internationals, surpassing the previous record held by Sri Lanka’s Ajantha Mendis who scalped 6/8 against Zimbabwe in 2012.

Earlier, propelled by a quickfire fifty from Shreyas Iyer, India end up with 174 for 5 in their 20 overs in the series decider. Shikhar Dhawan, KL Rahul set the foundation after which Shreyas Iyer changed the course in the middle overs and Manish Pandey provided the finishing touches.

Chahar who won both Man of the match and Man of the series awards, dismissed Liton Das and Soumya Sarkar upfront before breaking a 98-run stand between Mohammad Naim and Mohammad Mithun that had put Bangladesh in cruise mode. He then wiped out the tail with a hat-trick, the first by an Indian male cricketer, and 12th overall, in T20 internationals.

On seeing his post from his brother, Malti Chahar who rose to fame through her presence in the matches of IPL has posted a heart melting message for her brother. In her social media platforms, Malti Chahar wrote “So so so so so proud of you😘😘😘 To the hat-trick and best figure 3.2-0-7-6 in international t20😘😘😘 OMG..I still have goosebumps 😘 @deepak_chahar9 love you brother 😘😘 more power to you❤️❤️❤️” she wrote in her post with a video.

So so so so so proud of you😘😘😘 To the hat-trick and best figure 3.2-0-7-6 in international t20😘😘😘 OMG..I still have goosebumps 😘😘 @deepak_chahar9 love you brother 😘😘 more power to you❤️❤️❤️ #bleedblue #indiancricket #world #record

Malti who is a Miss India contestant became popular for her gestures during a game between Chennai Super Kings and Mumbai Indians in 2018 IPL tournament. She who grabbed the attention of the cameraman, was pretty animated after almost delivery. Her reactions have left the Indian social media people to go berserk as a lot of memes have also been created.

Malti Chahar’s both brothers were featured in the 11th edition of the Indian Premier League (IPL). While Deepak has been shined with the new ball for CSK, Rahul did not played a game for MI. They were representing the now-defunct Rising Pune Supergiant (RPS) franchise last year and impressed everyone with their bowling skills. Rahul is the leg-spinner and is expected to play in the next tournament.