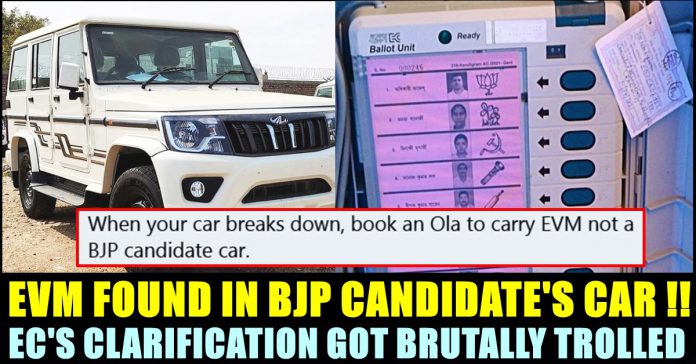 Internet exploded with reactions trolling the Election commission of India after a news surfaced on Electronic voting machine being carried in a car that belongs to a BJP candidate. The incident took place in Assam on Thursday hours after the second phase of polling ended. The vehicle, bearing registration number AS 10B 0022, belongs to sitting Assam MLA and BJP candidate from Patharkandi, Krishnendu Paul. The news came to light after an Assam based journalist shared a video of it on social media.

The video went viral among the users of Internet to an extend the opposition raised questions over the management of EVMs in poll bound state. On Friday, Congress’s Priyanka Gandhi Vadhra shared the video clip and asked the Election commission to act decisively. In response to the outrage that emerged, the Election commission has suspended four poll officers.

“Situation tense after EVMs found in Patharkandi BJP candidate Krishnendu Paul’s car.” wrote the journalist while sharing the video in his twitter space.

Reports suggested that the driver of the car ran away when the locals approached him to question. When they searched the car, an EVM was found inside the white Bolero car which belongs to the sitting MLA. When the locals searched the vehicle more, they couldn’t find any security or Election commission official, says reports.

Clarifying the incident, The Election Commission has said that the Polling party 149 met with an accident and added that the party comprised a president officer, three polling personnel, a constable and a Home guard. “At about 9.20 pm, polling party hailed a passing vehicle and boarded it along with their EVM and other things without checking ownership of the vehicle. As reported by them, they moved towards Karimganj and as they reached Kanaishil, Karimganj at 11 pm,they had to slow down due to traffic.” their report said.

The EC, further reported that a mob of 50 people surrounded the vehicle and started pelting stone at the car when they slowed down the car. “The mob also started abusing them and did not allow the vehicle to pass. When they asked the leader of mob, he replied that it was the vehicle of Krishnendu Paul, a contesting candidate of Patharkandi and he levelled allegations that EVM was being taken to be tampered with. They realised that something was amiss and alerted the Sector Officer,” the statement of EC said.

The Election commission also added that the EVM was found without any damage. “All the items have been deposited in the strong room” their statement read. However, users of Internet didn’t convince with the clarification of the EC as they started criticizing them with trolls and posts.

“When your car breaks down, book an Ola to carry EVM not a BJP candidate car. ” trolled a twitter user. Check out some of their reactions below :

When your car breaks down, book an Ola to carry EVM not a BJP candidate car.

At this moment, the only thing more unsafe than women in UP are EVMs in West Bengal and Assam.

Election commission should immediately asks to arrest the EVM who tried to kidnap BJP’s innocent MLA.

May be, but they can be hijacked in vehicles owned by BJP candidates and original EVM’s can be replaced by programmed EVM’s and then counted to show what the BJP wants.

Yesterday’s capture of EVM’s from a BJP candidate in Assam has exposed ECI!