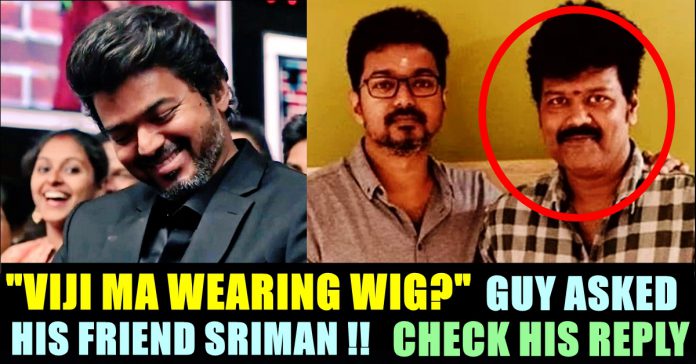 Actor Vijay made his fans go gaga through his speech in the audio launch of his upcoming movie “Master” which is being directed by Lokesh Kanagaraj. Unlike previous audio launch functions, Vijay appeared in this event with coat suit. He looked dapper with that costume of costume designer Pallavi Singh and also was seen with a different hairdo.

To the surprise of his fans, Vijay started his speech by shaking his leg on stage. The last time Vijay shook his leg in front of audience is in 2017 with Shah Rukh Khan in Vijay awards. He danced with his fan Shanthanu and with music director Anirudh. The most expected aspect of the audio launch, is the the speech of actor Vijay. In his speech, he said that he wore it by having his friend Ajith kumar as inspiration. As usual he also narrated the Kutti Story which he would always tell his fans and mentioned the latest IT Raid in a humorous way.

The appealing look of actor Vijay trended in social media platforms as pictures. Fans of him poured their love by changing display pictures and upload his pictures in their respective profiles. One of a Twitter user wanted to know if Vijay is wearing a wig or not. He decided to inquire about it to actor Sriman who is a longtime friend of Vijay. He also acted in “Master” and attended yesterday’s audio launch.

Sriman who saw this tweet, immediately replied to him by saying that he don’t know about it. He asked him to watch the movie and asked him not to comment now. “May be may not be what ever he does is designed by the crew of this film. Bro padam parunghaa no comments now just silence and prayers for corona . You will live my nanban in vjy 64 mASTER” he wrote in his comment.

May be may not be what ever he does is designed by the crew of this film. Bro padam parunghaa no comments now just silence and prayers for corona . You will live my nanban in vjy 64 mASTER

To one of a fan who doubted if it is a fake account of Sriman, the actor uploaded a video of him to make his followers believe that it is the original twitter account of him.

Why fake bro I’m not pic.twitter.com/ULDES6p8yO

Vijay asked apologies to his fans for not being able to allow them. He stated that the problem took place during Bigil audio launch and the deadly Coronavirus is the reason behind the decision. “I half heartedly accepted to this decision” he said during his speech. He even lauded his fans by saying that they are “different level” for their support when he got whisked away by the officials of IT department, “Back then I was so happy as there were not IT raids and all.” he said and added “But, even now, my life is fun”