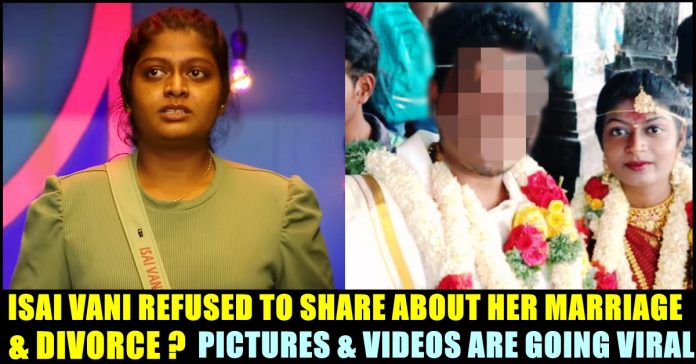 Wedding pictures and videos of Bigg Boss female contestant Isai Vaani are going viral in social media platforms with netizens, allegedly questioning about why she failed to expose about her marriage during “Oru Kadha Sollatumma” task in which contestants are allowed to talk about their personal life. While contestants such as Pavani Reddy shared about their marriage life and the tragedy she went through, Isai Vaani who got married in the year 2019 and divorced in 2020, decided not to share about it. However, reports regarding the same are flooding Internet with various kind of reactions from people.

Season 5 of Bigg Boss got inaugurated last week and contestants are being assigned to do tasks in order to get points in luxury budget. One of the very first tasks that was assigned for the contestants is “Oru Kdha Sollatummaa” in which the participants are allowed to tell stories about their personal life. Isai Vaani, during her turn, talked about the struggles she faced since her childhood due to poverty. She shared about how she became a nationally recognized singer, hailing from a poor background.

Being an aspiring singer since her child hood, the 25 year old reportedly got married in the year 2019. She fell in love with a drummer and married him, says reports. Videos and photos of the singer’s marriage event are doing rounds in social media platforms with many questioning why she failed to reveal about her relationship status.

The drummer named Sathish and Isai Vaani parted ways in the year 2020 after spending one year of marriage life. They made the decision due to some misunderstandings that took place between them, says reports. Friends of Isai Vaani, reportedly said that the singer married Sathish in a haste. “She was trying to hold the relationship even after knowing that the relationship won’t work for her. They parted ways mutually after knowing that it won’t work between them” friends of Isai Vaani said, according to reports.

“She was depressed after what happened in her life and it was us who brought her back to the normalcy. We thought Bigg Boss would cure her depression. She would get depressed if anyone talks to her about it” they reportedly added. However, one couldn’t question Isai Vaani why she didn’t share aabout her marriage life as it is her personal choice. The part where Isai Vaani shared about her marriage life could have been chopped out in edit as well.