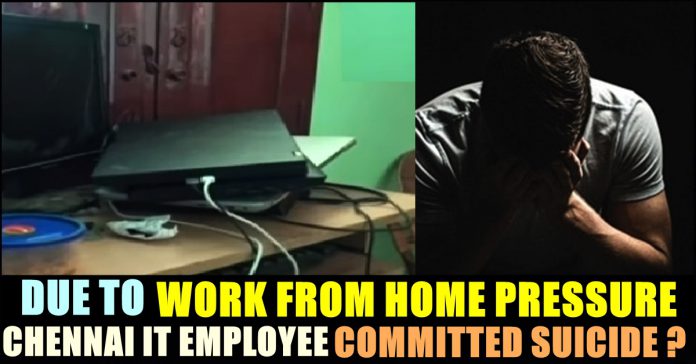 Vignesh, a 29 year old IT employee committed suicide for unknown reasons in Kovilpatti. He who graduated in Engineering was working in a software company in Chennai. News portals are suspecting that the depression he went through due to “Work from home” crisis led him to make the decision. His parents were looking for an alliance for him.

Vignesh belongs to Shanmuga Sigamani Nagar in Kovilpatti, Tuticorin. Due to the lockdown announcement, Vignesh went there from Chennai. He was working from home for his company, according to reports. Vignesh reportedly said that he did not like his job to his parents before committing suicide. He even had food with his family members on the day before his suicide in a depressed state.

After finished eating, Vignesh went to his room and hanged himself, says reports. When his parents entered his room, after so many hours of his absence, they came to know that their son hanged himself. Police officers who reached the spot, recovered the body and sent it to government hospital.

Vignesh who is a calm and composed person in nature, is also said to be a active person in work. He recently bought his home with his savings and with his father’s financial help, says reports. With his consent, his parents were searching for an alliance for him. Vignesh who always likes to spend time with family members, was seen depressed for past few days. Police officers are investigating the reason behind his suicide. Depression due to loneliness in this Corona lockdown and Work pressure are the two major reasons that could have killed Vignesh, says media reports.

Prime minister Narendra Modi extended the lockdown on the morning of 14th April. He said that the lockdown will last till 3rd of May. Coronavirus which killed more than 1 lakh people across the globe is acting as a serious threat to our country. To avoid the community spread, citizens of the country are advised to maintain social distancing which technically isolated people. To kill time, many people are involving in several activities but Vignesh seems to have affected in big time.