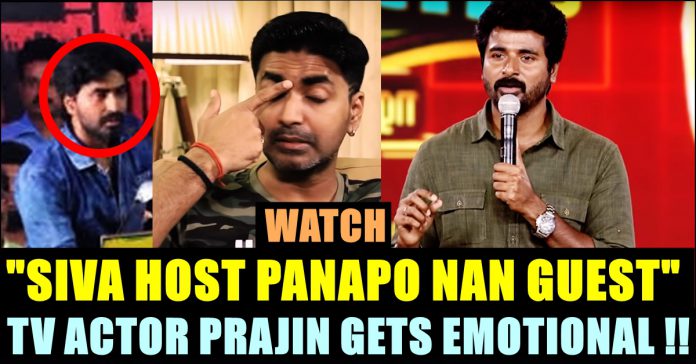 Starting his career as a video jockey in Sun Music, Actor Prajin’s ultimate aim is to receive national award in best actor category it seems. The actor who looks determined in achieving what he desires, says that he already bought clothes to wear while receiving awards in this recent interview with Behindwoods.

Prajin started his career in films with Dishyum followed by Saboothiri. He played the lead role in Pazhaya Vannarapettai movie which was released in the year 2016. The film didn’t go well during its release time and the actor says that it is because of the death of former chief minister J.Jayalalitha.

“They started closing theatres and we worked hard for that film 6 long years. After some time we realized that it is the fate of that movie” says Prajin who made his comeback to television through the TV serial Chinna Thambi.

While talking about the speech of Sivakarthikeyan in Namma Veetu Pillai audio launch, Prajin says that what he said was 100% true. “I went as a guest to a show which was hosted by this same Sivakarthikeyan. We all know about his pain and struggle. He worked hard to create his own style and grabbed a space in the hearts of small children. Now people would buy tickets for his films without second thought as they believe that his films would entertain for sure as he was an entertainer once. Even I am breaking the stereotypes in the same way Siva did. ” says Prajin in the interview who was last seen in Nivin Pauly-Nayanthara starrer Love Action Drama.

“I took 10 years of gap from media to enter cinema industry. Staying home for 10 long years without doing anything would feel like hell. I kept attending auditions and meeting directors. My wife supported us financially by acting in TV serials and I worked in few films from which I couldn’t get my pay well.” says Prajin whose wife is famous TV actress Sandra Amy. The couple were blessed with twin baby girls on 25 March 2019.

The actor believes that the second half of his life would be great comparing to the first half. “I love chasing even in cricket. As I had worst first half, I believe I would get a better second half” says the 38 year old actor.