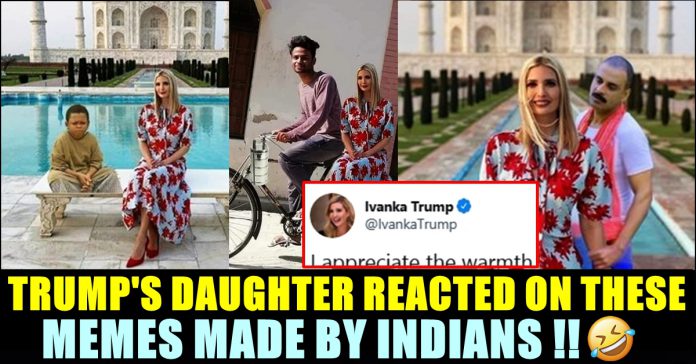 The rise of meme nation in India is revolutionary indeed. Now it got the attention of US president’s daughter which is something that is not supposed to be left alone. The two day visit of Ivanka Trump to India along with her father last week sparked meme fest like no other. After taking pictures with the iconic Taj Mahal and at the Rashtrapati Bhavan, Ivanka uploaded them in her official Instagram account in which she enjoys more than 60 lakh followers.

The grandeur and beauty of the Taj Mahal is awe inspiring!

As soon as the pictures of her surfaced in her official Instagram account, meme makers of India took no time to make memes by morphing her with themselves and with cinema characters. Now, the 38 year old has reacted to some of the memes which were brought to her attention.

“I appreciate the warmth of the Indian people. …I made many new friends!!!” she wrote in her official twitter account, in a way of responding to three memes. One of them had her morphed on a bicycle along with a guy, the other one had her with Manoj Bajpai of Gangs of Wasseypur and another one had a guy holding her around his arms.

I appreciate the warmth of the Indian people.

…I made many new friends!!! https://t.co/MXz5PkapBg

This tweet from her garnered nearly 2 lakh likes and more than thirty thousand shares. Check out some of the reactions received by Ivanka for her tweet :

It is notable that Donald Trump reacted to a video made by an Indian citizen which compared the US president with Bahubali Prabhas. Sharing the video, the user wrote “To celebrate Trump’s visit to India I wanted to make a video to show how in my warped mind it will go…… USA and India united!” With the song “Jiyo Re Baahubali” playing in the background, the video also features First Lady Melania Trump, with her face superimposed on that of actor Ramya Krishnan’s who plays the role of Sivagami, the foster mother of the protagonist played by actor Prabhas.

On seeing the video, Donald Trump wrote, “Look so forward to being with my great friends in INDIA!”

Look so forward to being with my great friends in INDIA! https://t.co/1jdk3AW6fG

Comment your views on their way of accepting these cheeky memes of us !!