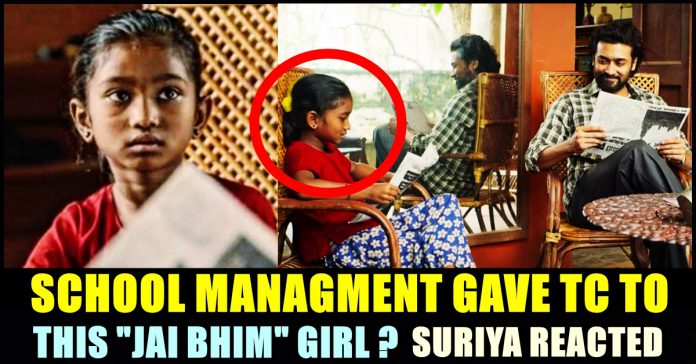 A tweet uploaded by actor and one of the founders of CTC media boy Riyaz on the girl who acted in “Jai Bhim” film getting expelled from her school went viral among the users of the micro blogging social media site. The girl acted as a daughter of Rajakannu-Sengeni who belong to the tribal community. The tweet got liked by Suriya Sivakumar who acted as lead and produced “Jai Bhim”. On seeing the online activity of the actor, Riyaz said that the intention behind his tweet got fulfilled and hoped for the best to happen for the kid.

Acting performances of Suriya, Manikandan, Lijomol Jose, Prakash Raj, Rajisha Vijayan, Director Tamil and all the others got highly appreciated by fans and critics. Now, a shocking report on the girl who acted as a child of Mani kandan and Lijomol Jose getting expelled from school sent shock waves to the audience of Tamil cinema. Riyaz said that the school management of the kid asked her to get transfer certificate as she acted in the film. “She was studying only in the school that is located in my area” Riyaz said in his post.

The “Naanum Rowdy Thaan” actor also said that he posted the tweet only for the betterment of the kid. “I am not intended to ruin the school name or to make headlines. Let’s hope for the best to happen” Riyaz further said.