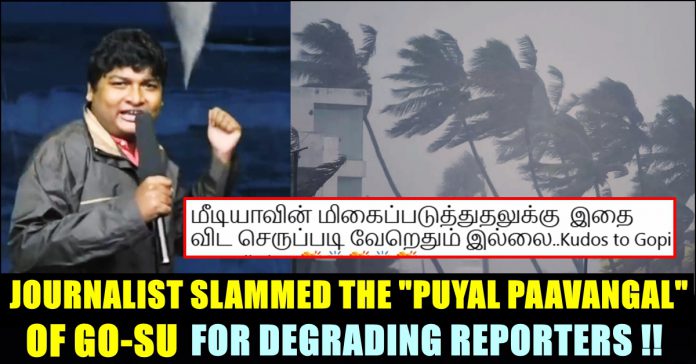 Youngsters involving themselves in entertaining the public through youtube platform by making sketches, spoofs, vlogs, cookery videos and other visual contents became a trend in this digital era. Their target audience are varying for each content and almost all the people who belongs to every age group are acting as the beneficiaries of these kind of contents. Especially, the sketch videos which are being made by having the current scenarios of the society as core content, helps people such as office goers and college students to reduce stress due to the high amount of hilarity it provides.

Recently, a Tamil youtube channel named as “Parithabangal” made a sketch video based on how the reporters of Tamil media channels did reporting during the “Nivar” cyclone. As we all know, the impact created by “Cyclone Nivar” across the state Tamil nadu is huge. Many parts of the capital and Kadalur district didn’t have electricity for two long days. Three people died in Tamil nadu due to the heavy rain caused by Cyclone Nivar and 118 houses were damaged across the state. Precautionary measurements were activated by the government and the authorities worked on full swing to bring the situation to normalcy.

The state government has estimated that around 9,687 hectares of agricultural and horticultural crop had been damaged by the storm, including 5,950 hectares of matured paddy crop in districts like Cuddalore, Kancheepuram, Chengalpet and Tiruvannamalai. During the tough situation, the only choice people had was to sit in front of their television sets to know about the status through news channels. Many reporters of different news channels reached the actual spot and reported to the public.

Days after the Cyclone made landfall at Marakkanam in Villupuram district, between Puducherry and Chennai, things came back to normal due to the precautionary measurements of the government. Meanwhile, makers of “Parithabangal” youtube channel, came up with a sketch video addressing the Cyclone Nivar.

Throughout the video, they imitated the reporters of Tamil news channels and tried to convey the entire “Cyclone” scenario in a humorous way to entertain their followers. The sketch video became a huge hit as it garnered four million views so far with three lakh plus likes. Particular video clippings did rounds in other social media platforms such as Facebook, Whatsapp, Twitter etc and meme creators started using screenshots from the video to make memes.

Check out some of the reactions the video received below :

Though the team “Parithabangal” started their video with a disclaimer saying “The scenes that took place in the upcoming program are imaginary. We are not intended to hurt the sentiments of any individual”, Madan Karthikeyan whose Facebook bio says that he is a Principle camera person at Puthiya Thalaimurai TV, expressed his disappointment.

Madan said that there is no point in making people laugh by degrading another set of people. “You are making such videos by staying inside four walls and people are laughing at it. Regardless of rain, cyclone and heat, every journalist and cinematographer is collecting news by making their presence on the field” he said in his post.

Further Madan questioned whether the makers of “Puyal Paavangal” are aware of the damages caused by “Nivar” cyclone. “Likewise, people who affected during “Gaja” storm couldn’t recover still. What have you done for them ? Only few know how many lakhs you are earning by thinking that you are making people laugh. Our service is for the public” said Madan and added a Thirukkural with an explanation of Mu. Varadarajan for it.