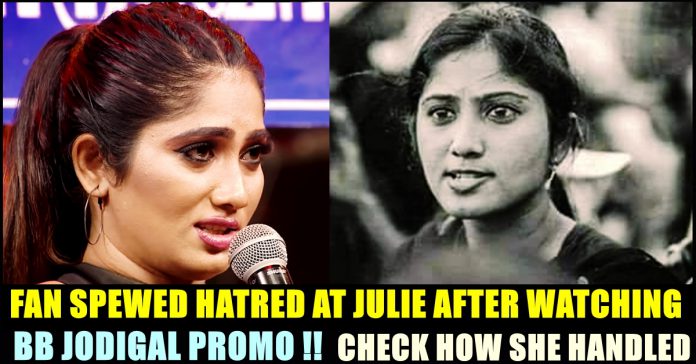 Julie who is known for her stint in Bigg Boss house, made her come back in social media with a bunch of pictures from her recent photo shoot which were captured in a beach. The pictures went viral across social media platforms with various kind of reactions from the users. After making a number of attempts to act in mainstream cinema, Julie recently made her come back to television through Bigg Boss Jodigal show which is a dance reality program participated by the contestants of Bigg Boss reality show.

Being a nurse by profession, Julie acted in short films and music videos before entering Bigg Boss shows which are available in youtube. After getting participated in the Bigg Boss show, the people’s way of seeing Julie changed completely. Julie became the first victim of Bigg Boss’s “Kurumpadam” which is used by Kamal Haasan to reveal an individual’s original behaviour. However, after seeing the “Kurumpadam”, Julie alleged that 5 seconds of her video footage is missing from that “Kurumpadam”.

In one of the recent promos that got released by “Bigg Boss Jodigal” show, Julie expressed her emotion on being a subject to severe trolling after participating in the Bigg Boss show. “They started spitting at my face in the same Marina beach where I protested. No matter how many failures you face, Don’t give up until getting success” Julie said in the promo.

Watch the promo below :

Among the various kind of reactions which surfaced reacting for Julie’s emotional outcry, an online user personally messages Julie spewing hatred at her. “Instead of spitting at you, they should have slapped you with slippers. You would start acting as soon as when it comes about Bigg Boss. They were living peacefully without seeing you all these days, can’t imagine people are going to tolerate you” the online user said in his message.

Sharing the screen shots of his messages, Julie wrote “Brother, Thanks a lot . . your message will make others understand how much pain I undergo in real life” in her reply.

Check out the story shared by Julie below :