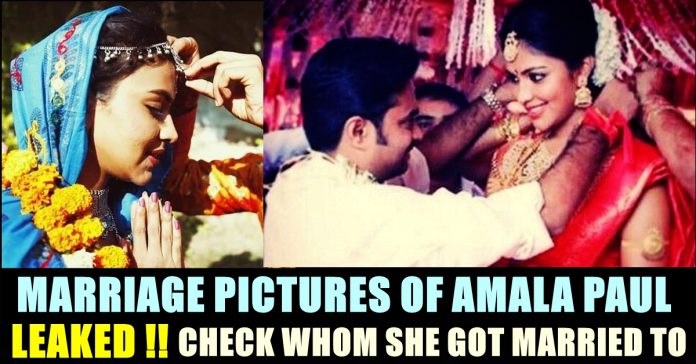 Popular actress Amala paul who is known for acting in films like “Mynaa”, “Velai Illa Pattathari”, “Aadai” married to a Mumbai based singer, according to reports. The pictures of her marriage is going viral in the social media platforms. Amala Paul is an Indian film actress who works in the South Indian Film Industry. After appearing in supporting roles in the Malayalam film Neelathamara. She received critical acclaim for the portrayal of a controversial character in the film Sindhu Samaveli. Despite the failure of that film, Amala became noted after playing the title role in Mynaa, receiving critical acclaim for her work.

She became a very busy actress after doing the film “Thalaiva” with actor Vijay. Danush’s VIP and VIP 2 also got her fame in the Kollywood industry. The actress was last seen in “Ratchasan” which became a blockbuster in box office. She is also one of the actress who is very active on social media platform where she raised her voice for the MeToo movement by accusing director Susi Ganesan along with independent filmmaker Leela Manimekalai. She also caught up in number controversies after divorcing director Vijay.

Check out them here :

Bhavinder Singh reportedly shared those pictures with a caption saying “Throwback”. It was also alleged to be a secret marriage, according to reports. Earlier Amala Paul married filmmaker A.L Vijay, who rose to fame in Tamil film industry through his historical period drama “Madrasapattinam”. A.L Vijay married actress Amala Paul in the year 2014 with whom he worked in films like Deiva Thirumagal, Thalaiva etc. However, After two years of marriage life, the couple decided to separate and got divorced in the year 2017. Since the separation, both of them became very much busy in their respective fields.

Regarding their divorce, Producer A.L Azhagappan, father of A.L Vijay said “It is nothing about marrying a girl from cinema industry. I have treated actresses who worked with us like sister. We can’t blame a woman blindly. What worried me the most is the characters of Vijay and Amala Paul won’t work for a marriage life. We have heard a lot about her. But we didn’t accuse her blindly but I kept insisting Vijay that it won’t work”. Amala Paul was last seen in Rathna kaumar’s “Aadai” and is gearing up for her next release “Atho Antha Paravai Pola”.