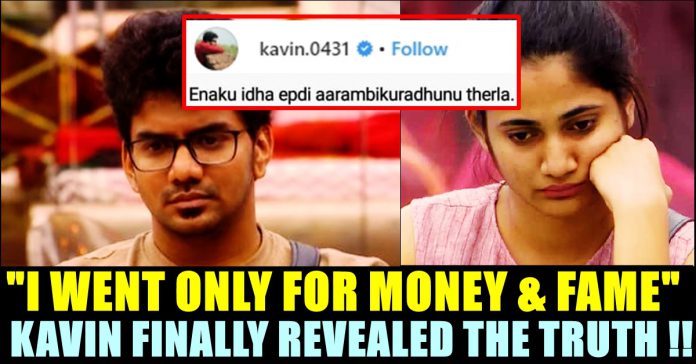 As soon as Kavin got out of the Bigg Boss house with 5 lakhs, the viewers of the show including the evicted contestants started filling Internet with their opinion on his decision. Though the housemates compelled Kavin to stay inside the house for 3 more days till weekend, Kavin adamantly went out of the house without considering the tears shed by Losliya and Sandy.

Now the time for Kavin to speak out has came it seems. In his official Instagram account, the actor has posted a lengthy note to the followers of Bigg Boss show. The note starts with the actor saying that he don’t know how to start it.

“Enakku idha epdi aarambikuradhunu therla. I thought I’ll do this after the end of the show or after I sort out all the issues I have right now.First of all I would like you all to understand why I went to the show. I was in a weak spot and I thought I had almost failed in whatever I tried. I saw this as an opportunity to get back what I had lost in the last couple of years”. the post read.

The actor also said that he expected some amount of money and little fame from the show. The actor says that he couldn’t enjoy the love he is receiving now whole heartedly due to some unexpected problems. “Right now more than giving back the love I received from you all I think, it is necessary for me to take care of my family”. the actress note read.

He reiterated the things that he said to Kamal Haasan while he was walking out. “I accept the love I get from you all, at the same time I’m also equally responsible for the hatred I receive from some” he added in his note. He also believed to reduce the hatred by living a good life further. Kavin apologized for letting his fans down and asked them to understand and forgive him.

Kavin volunteered himself to go out of the house without competing in the final week. The reason behind his decision is Bigg Boss’s offer of providing 5 lakh to the one who walks off. Being one of the most controversial contestant in the Bigg Boss house, The actor who was approached in last season, decided to take part in this season as he was acting in a movie as protagonist at that time. However, the movie which was titled as “Natpuna Enna nu Theriyuma” release delayed for several reasons and went unnoticed once it got released. “Pizza” “Sethupathi” fame Ramya Nambeesan played the role of his love interest.

Recently, to our shock, a news has surfaced that Kavin’s mother has been sentenced for 5 years jail along with two other family members for chit fund fraud case. The judgement was passed in Trichy court on 29th August.