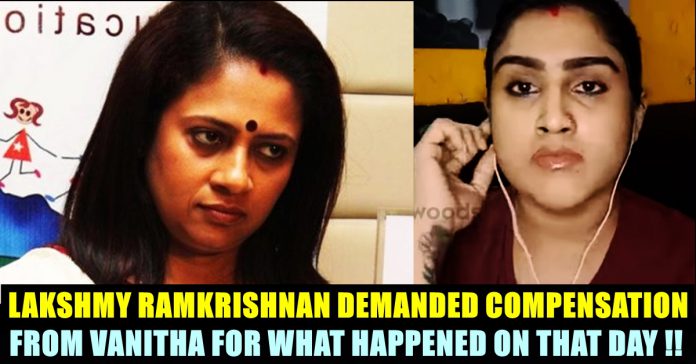 A notice on demanding compensation has been sent to the actress and youtuber Vanitha Vijayakumar by the lawyer of Lakshmy Ramakrishnan who had an argument with the actress on air. Vanitha who shared the notice in her official twitter account, said that she is going to send a counter legal notice through her lawyer to Lakshmy.

For involving in a video with Elizabeth Helen, wife of Peter Paul, Vanitha Vijayakumar abused actress and Director Lakshmy Ramakrishnan in an interaction. Lakshmy Ramakrishnan, a 49 year old supporting actress and filmmaker, is known for hosting a show named as “Solvathellam Unmai”. On Sunday, a video of herself interacting with Elizabeth Helen and hearing about her complaints against Vanitha Vijayakumar streamed in a popular youtube channel.

On seeing the video, Lakshmy said that the way Vanitha and Peter Paul behaved during their conversation is completely unacceptable and said that their behaviour is “Atrocious”. Vanitha Vijayakumar who got irked, appeared in a live interaction with Lakshmy and abused her directly. Both of them assassinated their personal character.

When the host of the show tried to make them state their opinions one by one, Vanitha who intervened said that she never agreed for a debate. Things turned ugly when Lakshmy asked Vanitha to act with some dignity. Vanitha repeatedly asked Lakshmy who she is to have a say in a problem that took place between herself and Helen.

At one point, Vanitha started abusing Lakshmy’s husband, pointing out how Lakshmy reacted to that earlier interview. She even assassinated Lakshmy Ramakrishnan’s character and called her “Garbage”. Lakshmy said that she didn’t want to involve in an argument with a street fighter. When Lakshmy wanted to disconnect the call, Vanitha said that she will record the video and will upload it to tear her apart.

The video went extremely viral whereas people in social media took sides and reacted to it in various ways. Now, more than after a week, Lakshmi Ramakrishnan demanded Rs.1.25 crores as compensation from Vanitha for the defamation caused by her. The notice required an unconditional apology from Vanitha in writing for making “slanderous and defamatory” statements against Lakshmy through the show. It also asked Vanitha to desist from making any statements against Lakshmy ramakrishnan in future in any media platforms.

The notice further asked Behindwoods youtube channel to publish a disclaimer saying that Vanitha is solely responsible for the statements made by her. The notice gave 7 days time for both and said that the legal case will be filed against them if they fail to fulfill the demands.

Sharing the notice Vanitha Vijayakumar said that Lakshmy Ramakrishnan is threatening her through her lawyer demanding Rs.1.25 crores of money. “See the good hearted social activist threatening me thru her lawyer demanding 1 crore 25 lacs for trying to act as if helping a family and interfering unnecessarily in my personal and acting as a fake judge when she has no authority to do it..sucks the blood of innocent victims. My lawyer is sending her a legal notice on the same…this is not a court document it’s only a sophisticated ransom note they lawyers.” swrote Vanitha in her tweet.

Vanitha further stated that she is not even required to face this issue legally saying that Lakshmy doesn’t have any grounds.

No legal even needed she doesn't have any grounds…fraud woman