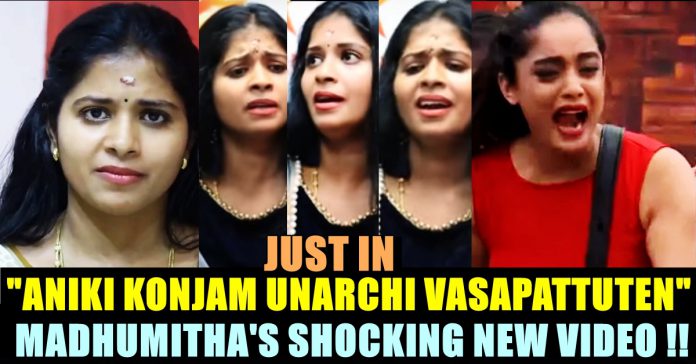 After that controversial press meet where Madhumitha accused Abhirami & co for their behaviour inside the house, she has now released a new video ina way of updating her current state. She released the video after receiving request from several fans according to the video.

In the video Madhumitha says “Lot of you asked me to come in Live to talk to me. As I don’t use social media, I couldn’t come in Live. I would like to thank my supporters who support me for what happened to me inside and outside the Bigg Boss house. Everything I told in the previous press meet are completely true. But I got a bit too much of emotional while expressing my views which I realized now.” said Madhumitha in the video.

watch the video of her here :

#BiggBossTamil3 #Madhumitha👸 Latest Video expressing gratitude to Us.
"Our Sister is slowly recovering from her terrible incident in #BiggBossTamil its good to know."
Some people may not know the good in you, We know that you are a good soul.#WeSupportMadhumitha🧚‍♀️Get Well Soon pic.twitter.com/jCRF1Fehgo

“The reason behind me getting emotional is nothing but the mental trauma I went through while being inside the Bigg Boss house. It depressed me very much. I got affected a lot for 20 days after coming out of Bigg Boss house due to the phone calls and questions. When I got an opportunity to meet people after all the days, I became emotional” Madhumitha added who also said that her injury is curing and she started attending movie shoots. She also requested her supporters not to cry.

Madhumitha’s latest interview to media houses received widespread outrage as she accused the contestants inside the house for “Gang-Harassment”. After her controversial termination, Madhumitha opened for the first time about her issues with the Vijay Television management.

She clearly says that she has been harassed by the gang which consists of 8 members on that day of the incident happened. Even after cutting her hand, no one cared for her according to her statement. She thrashed the contestants for their behaviour on that day and expressed her gratitude for Cheran and Kasthuri.

She even accused Abhirami for not wearing proper dress in the evenings. “If self destruction leads to termination, Abhirami hurted herself on the day she had that problem for having Mugen’s bottle baby. Mugen damaged the property of Bigg Boss house which is should also lead to termination. Why me alone?” asked Madhumitha in that interview.

What do you think on this video released by Madhumitha ?? Comment your views below !!