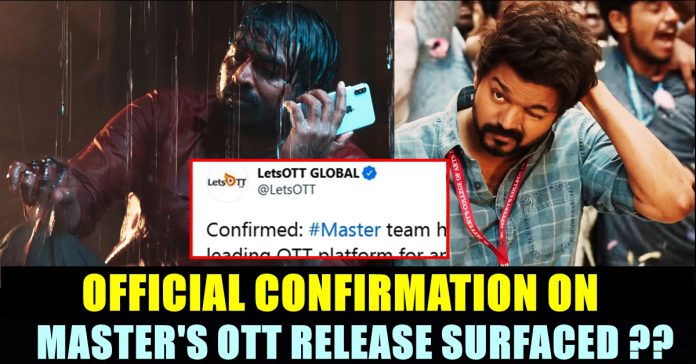 After so many speculations and expectations, the official confirmation on Master’s OTT release surfaced. A verified twitter page named as “Lets OTT Global” made the news public by uploading a tweet. As soon as seeing the news, online fans of actor Vijay are reacting in various ways. Most of them requesting the makers of “Master” to release the film in theatre as planned. It is notable that the producers and director of “Master” brushed off the OTT release rumours several times.

The much awaited teaser of “Master” released on youtube lately only make the fans to crave for the film. The 91 seconds long teaser promised a mass commercial action entertainer with a cat and mouse chase between Thalapathy Vijay nd Makkal Selvan Vijay Sethupathi. Starting the teaser by revealing the character name of Vijay, the teaser went on to expose the roles of Vijay Sethupathi, Malavika Mohanan, Shanthanu, Arjun Das, Gouri Kishan and others. However, no announcement regarding the release was made in the teaser.

Dhanush-Karthik Subbaraj’s “Jagame Thanthiram” and Vijay-Lokesh Kanagaraj’s “Master” are the two other films that are highly expected to get a theatrical release post lockdown. These films are believed to bring the audience back to the theatres who are hesitating to enter the theatre due to the spread of the deadly virus COVID 19.

“It is impossible for the film to get an online release as the film is made of a huge budget. Vijay is also very firm on releasing the film only on theatres” Britto said in an earlier interaction with Vikatan youtube channel. Now, the official twitter account of “Lets OTT Global” made the announcement of Master’s direct release in online platforms.

“Confirmed: #Master team has initiated talks with a leading OTT platform for an unheard price.” read the tweet of Lets OTT Global.

Confirmed: #Master team has initiated talks with a leading OTT platform for an unheard price. pic.twitter.com/olrlDwQIfu

A Tamil daily also updated the same. A piece said that the film is going to be released on “Netflix” from Pongal.

Weeks ago, Times of India’s publication added actor Vijay’s “Master” in the list of films that are going to be released in OTT. Along with previously released “Ponmagal Vanthal”, “Penguin”, “Cocktail”, “Danny”, “RK Nagar”, “Lock Up”, the piece which was written in the reputed newspaper added “Andaava kanom” and “Master”.

Check out some of the reactions from fans for this announcement :

The digital rights of the film was already sold to Amazon prime, according to reports. After seeing the reception garnered by Suriya’s “Soorrarai Pottru”, the “Master” team could have made this decision. However, an official confirmation from the makers of “Master” is awaited.

Update : The makers of “Master” released a press note addressing that the film is eyeing only for a theatrical release. They also informed that a reputed OTT platform had approached them. But the makers confirmed the film’s theatrical release and requested theatre owners to stand and support.