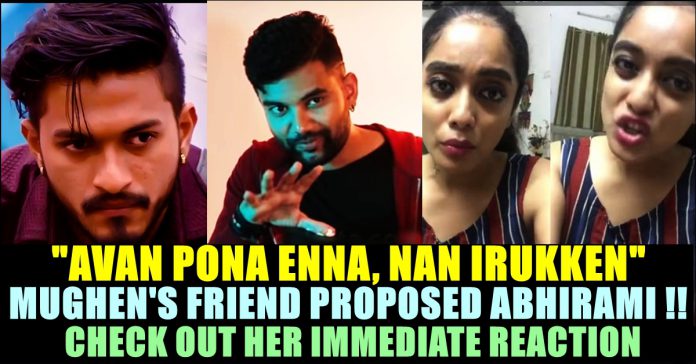 Almost everyone who knows Indian legendary actor and a political party leader Kamal Haasan must have heard about the relationship of Abhirami Venkatachalam and Mugen Rao as they three connected through a show called as Bigg Boss Tamil.

Even after the eviction of Abhirami Venkatachalam, it seems that the waves she created inside the Bigg Boss house has not stopped rippling. One of Mugen’s friend and his colleague Bala Ganesan has proposed to her directly on air in an interview of Galatta.

While talking about Mugen and his natural behaviour Bala Ganesan said that he has every right to love Abhirami as same as the way she loves Mugen who said that he already has a girlfriend named as Sparkle. In the interview, Bala Ganesan who resides in Malaysia says that if Abhirami says “Yes”, he is very much interested in arriving Chennai to see Abhirami in person.

“I never uploaded a picture of a girl in my Instagram account and said that I love her but I did it for Abhirami venkatachalam. I like her very much that I couldn’t resist myself from supporting her. No one could stop me from loving her. I am here for you Abhirami. Don’t worry, I am very much crazy about you” he said in the interview.

Many viewers of Bigg Boss show who watched this interview started reacting. One of a fan had the courage to inform it to the “Nerkonda Parvai” actress herself. In one of her post, the fan asked Abhirami to watch this video.

To this comment, Abhirami who is very much interactive with her followers since her eviction, immediately replied as that she watched the interview and said that she very much angry after seeing the interview. In her reply comment she wrote “yes I saw m very angry …”

The stunning actress who played the character of “Famitha” in Ajith’s Nerkonda Parvai, is one of the latest contestant to be evicted from the Bigg Boss Tamil house. Abhirami has been the most talked about contestant in the show for her relationship with Mugen Rao. As soon as getting evicted from the show, Abhirami became super active in social media platforms.

Abhirami was initially criticized by the audience for confessing that she is in love with Kavin on the first day of the show. She also faced the wrath of social media which alleged that she is twisting Mugen rao and distracting him from playing the game. But now after her eviction, many fan pages started emerging and they are pouring love on her constantly which is evident through her Instagram stories.

What do you think on this love proposal of Balaganapathy ?? Comment your views below !!