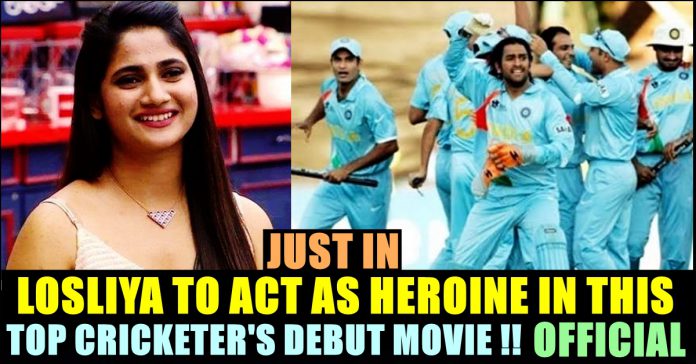 Losliya who became a overnight sensation through her Bigg Boss stint, has announced about her first movie project after several months of the reality game show, hosted by Ulaganayagan Kamal Haasan. Bigg Boss season 3 successfully ended with Mugen rao grabbing the title. Sandy became the first runner up where as Losliya was pushed to the third place. Since the show, Losliya was seen conducting photoshoots.

Many fan pages have emerged for Losliya as soon as she participated in the show. She is currently enjoying 8 lakh followers for her official Instagram account. She has been posting pictures from her photoshoots to keep her fans and followers engaged. Now, in a way of surprising her fans and followers, Losliya has announced about her first ever project in Tamil.

The film which is going to have former Indian cricketer and current Chennai Super Kings bowler Harbhajan Singh in the lead role, has been titled as “Friendship”. Sharing the title look of the post Losliya wrote “With All your love . I’m really happy to announce This is my first film in Indian cinema . Our beloved Harbajan Singh sir doing a lead role in this film .thank you for my entire team for giving this awesome opportunity and an amazing role .. Thank you all 🤗”

With All your love . I'm really happy to announce This is my first film in Indian cinema . Our beloved Harbajan Singh sir doing a lead role in this film .thank you for my entire team for giving this awesome opportunity and an amazing role .. Thank you all 🤗 @harbhajan3 #Friendship. @JPRJOHN1 #ShamSurya @ImSaravanan_P @RIAZtheboss #SeantoaStudio #Cinemaasstudio Maintain #Friendship

Meanwhile another update about her upcoming project is also doing rounds in social media platforms. Pictures of Losliya attending a movie’s Pooja ceremony are doing rounds in social media platforms. The pictures shows “Maaya” fame Aari and Shrushti Dange standing aside Losliya. Though Losliya officially announced about her first project, many believes that her film with Aari going to be her debut movie.

Check out the pictures below :

#Losliya signs a Tamil film. @Aariarujuna will be doing the lead role along with @srushtiDange .. Official updates will be revealed soon pic.twitter.com/93mIWU5S5V

Losliya is one of the most loved and hated contestant of Bigg Boss season 3. Initially she impressed the audience with her dance moves and cute looks. Later, when she started building relationship with Kavin despite of knowing about his relationship with Sakshi, she started facing the wrath of the audience. However, Losliya and Kavin has a separate fan base in social media who calls themselves as Kaviliya. (Also Read : Official Confirmation On Kavin-Losliya’s Relationship Status !!)