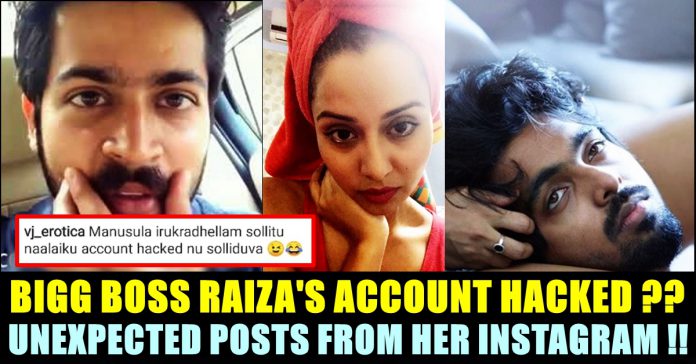 Raiza became a household name in Tamil Nadu following her successful stint in the first season of reality show Bigg Boss, hosted by Kamal Haasan. The actress won praise for her matured performance in the romantic-drama Pyaar Prema Kaadhal, in which she acted along with her Bigg Boss housemate Harish Kalyan.

Being an Indian model and actress, she rose to fame through her cuteness and innocence in the first season of Tamil reality TV show Bigg Boss hosted by Kamal Haasan. The actress who now has a separate set of fan following is very much active on social media especially in Instagram.

She usually posts her daily routines and pictures of herself in photoshoots in her Instagram account which enjoys more than 11 lakh followers. Now to our shock the actress started uploading the pictures of leading heroes of Kollywood with captions which appreciates their looks which is not usual.

Initially she posted a picture of Harish Kalyan working out in gym with a caption saying “Wat is this hotness ???!!! I’m melting 🥵🥵🥵”. She also tagged the actor’s original account in her post.

As they both worked in a film together and knew each other since Bigg Boss season 1, followers of the actress thought that it is usual. Followed by that she posted a picture of G.V Prakash with a caption which read as “Vera level hotness 😍”

G.V and Raiza also working in an upcoming project together as leads. However few fans found it strange and questioned about it in comment section. Now, to our surprise, she uploaded the picture of Vishnu Vishal with a caption which reads “Wow hotness please turn around 😍”

This made the fan to confirm that her account is hacked. It is notable that both Raiza and Vishnu are going to feature in an upcoming film which is titled as FIR. Few even trolled the actress for these posts and few started commenting that the account is hacked. Check out some of their reactions here :

However, in a way of proving them wrong Raiza added a story by confirming that the posts were uploaded only by her and it was also written that they deserve the appreciation.

This behaviour of Raiza puzzled the netizens who are expressing their speculations in social media. A set of fans believe that it might be a promotional tactics for a film that the trio going to feature together. The hashtag #Vavavoom seems to be a short of a film title as well.

Well, what do you think on these posts of Raiza ?? Comment your views below !!