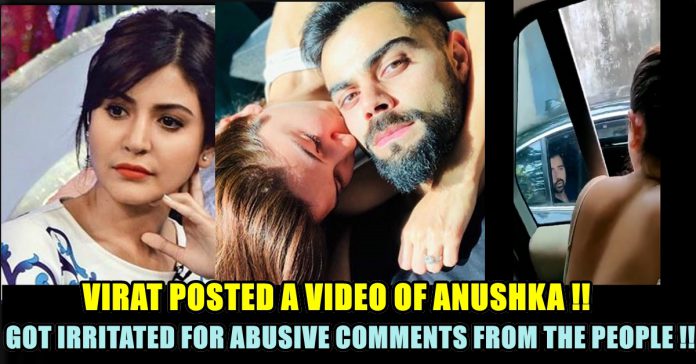 Whether its a co-ordinated colour palette, full-on matching pieces, or simply borrowing from the Mr, actor Anushka Sharma and cricketer Virat Kohli have been spotted together in lot of occasions. Anushka Sharma makes sure to be by her husband Virat Kohli’s side during the big moments of his life. Recently, the Zero actor was seen cheering for the Indian skipper at an award ceremony in Bengaluru and the two were a sight for sore eyes as they smiled for the shutterbugs. Now, a day later, the much-in-love couple once again made a public appearance after returning to Mumbai. Not only physically , the Indian skipper is mentally clean and straight which is proved by his twitter post which was posted by him a few moments ago. The couple was intended to make an awareness through questioning a fellow passerby who threw garbage on the public road. In the video Anushka Sharma is seen questioning the strangers who threw garbage while travelling in their car. She shouted at them at first and suggested them to put it in dustbin. The whole incident was captured by Virat Kohli it is believed. Watch the post below :

Saw these people throwing garbage on the road & pulled them up rightfully. Travelling in a luxury car and brains gone for a toss. These people will keep our country clean? Yeah right! If you see something wrong happening like this, do the same & spread awareness. @AnushkaSharma pic.twitter.com/p8flrmcnba

Following this tweet Virat find most of the people’s reaction as irritating it seems. To which he wrote another tweet bashing all the people who make fun out of it. He reproached for everything becoming “meme” content these days. Check the tweet below :

Lot of people who don’t have the courage to do something like this find it funny. Everything for people nowadays is meme content. Shame.

What do you think of Virat’s activity ?