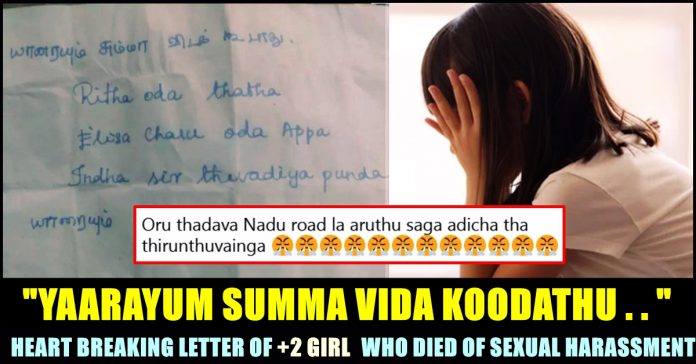 Identified as Pon Tharani, the 17 year old deceased was studying 12th standard. Born to Magudeeshwaran, she was living with her family in Kottaimedu, Coimbatore. It has been reported that Pon was studying 12th standard in the Chinmaya Vidyalaya Matriculation Higher Secondary school, where she was sexually harassed. After bringing about the same to the attention of her parents, Pon Tharani was shifted to another school, a couple of months ago.

Reports suggests that the kid could have been traumatized by the incident that happened to her. On Thursday, when there was no one in the room, Pon tharani locked her room and hanged herself from a ceiling fan. Parents of the deceased raised a legal complaint in the Ukkadam Police station. In the complaint letter, the parents have mentioned that their daughter has left a suicide note naming a school teacher and two others who sexually harassed her.

A teacher named Mithun Chakravarthy has been taken into custody after the protest made by the parents of the victim. He was booked under protection of children from sexual offences act and also under the Indian Penal Code section 306 (Abetment of suicide). A letter is doing rounds in social media platforms, claiming that it was written by the victim before taking her life off.

Check out some of the tweets that surfaced under the hashtag “Justice For Pontharani” :

She Mentioned 3 Members Name In This Letter And Media Highlighted The Main Victim ( Teacher ) What Happened To Other 2 Members She Mentioned It Above As Ritha’s Grandfather And Elisa Charu’s Dad Need To Find Out Those 2 Bastards Also Who Related To This #justiceforpontharani pic.twitter.com/ZDER4rjUt0

Let her be the last One 🙏

#JusticeForPontharani
Everyone talk about only the teacher, What about other culprits mentioned in the letter, Look like they are her friends father and grand father