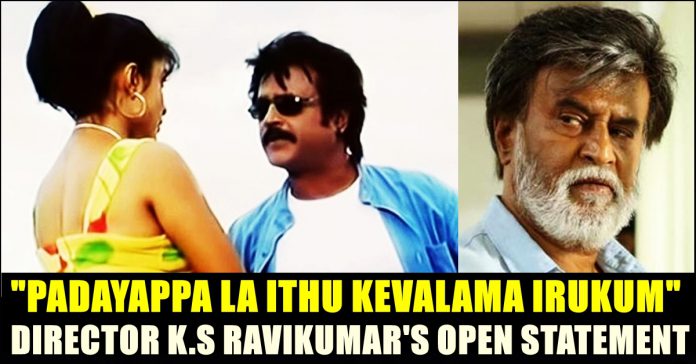 We can part Tamil cinema as before Padayappa and after Padayappa. The film rewrote the meaning of “mass” in the history of Tamil cinema and also became the first film to collect 50 crores in Tamil film industry, according to sources. The film had Superstar Rajinikanth and Ramya Krishnan in the prominent roles.

Directed by K. S. Ravikumar, the film also featured Sivaji Ganesan, Soundarya in the lead roles with Abbas, Lakshmi, Radha Ravi and Nassar in supporting roles. The soundtrack album and background score were composed by A. R. Rahman.

The plot revolves around Padayappa, an engineer whose father dies of shock soon after he is defrauded and loses his property to his foster brother. Neelambari initially loves Padayappa, but plans to take revenge on him and his love interest Vasundhara after his family humiliates her father. The rest of the story deals with Padayappa climbing back to financial success and arranging his daughters’ marriage while overcoming all the obstacles placed by Neelambari.

Being one of the very few filmmakers of Kollywood who directed all the top stars such as Rajinikanth, Kamal Haasan, Ajith Kumar and Vijay, Ravikumar has took part in an interaction with a senior director of Tamil film industry Chithra Lakshmanan for his youtube channel Touring Talkies. In the interaction, Ravikumar has openly shared about the worst aspects of one of the biggest blockbusters of his career, Padayappa.

While talking about the failure of his animation film “Kochchadayan”, K.S Ravikumar has said that the computer graphics of the film was not on par with the animation films of hollywood in which they are making films with 1000 crore budget. “The animation scenes didn’t come out well in Kochchadayan. It required several more crores to be an excellent content. In foreign, they are making films with 1000 crore budget, how could we make a good animation film with 100 crores or with 50 crores?” Ravikumar asked in the interview.

Watch the video below from 20th minute :

Padayappa won five Tamil Nadu State Film Awards. Padayappa was dubbed into Telugu under the title Narasimha. The dubbed version was also commercially successful, and had a theatrical run of 50 days at 49 theatres.

Comment your views on this honesty of the director !!