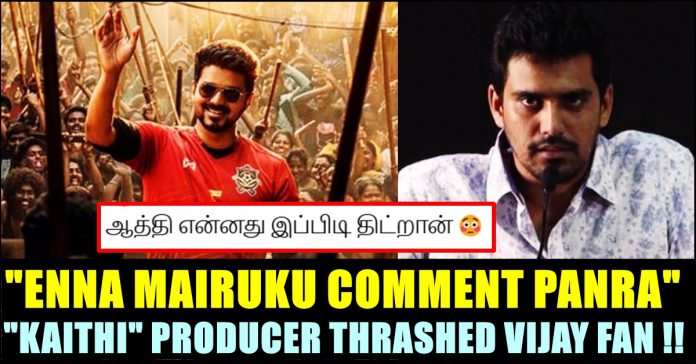 S.R Prabhu, producer of “Kaithi” got extremely angry on seeing a comment of a Vijay fan in one of his promotional post of his upcoming film. S.R Prabhu who is known for producing films like “Aruvi”, “NGK”,”Joker”, is a relative of the veteran actor Sivakumar which naturally makes him as a cousin of actors Suriya and Karthi.

Twitter war arouse between fans as “Kaithi” and “Bigil” are fighting to get more number of screens across Tamilnadu. Promotional activities from both the movies were also started and it is also in full swing. Meanwhile, a promotional post of Kaithi’s producer S.R Prabhu offended the fans of actor Vijay.

The producer who has been uploading posts regarding “Kaithi” release, is keen on promoting his film through every possible aspects. His earlier replies to the fans of “BIGIL” made headlines as well. Recently he uploaded promotional post of “Kaithi” by adding a caption which said “Kaithi have got all the fun u will expect!! 💥🔥”

#Kaithi have got all the fun u will expect!! 💥🔥 pic.twitter.com/CwATuQc7vk

To this tweet, one of a fan whose twitter handle name is “Mohan Bigil”, in a way of trolling, said “ஒரு மயிரும் expect ம் இல்லை” which is roughly translated as that no one has expectation on the film.

Prabhu who lost his cool, replied to him in the same away which left his followers in shock. The producer replied to Mohan Bigil by writing “அப்புறம் என்ன மயிருக்கு என் timeline ல comment பண்ணுறீங்க bro?😬” (Then why do you commenting in my timeline)

This tweet of Prabhu received widespread reach as soon as it got surfaced and fans started reacting to it right away. Check out some of the reactions for his tweet :

Fan Accidentally Booked “Kaithi” Instead Of “BIGIL” & Complained About It !! Here’s How Kaithi Producer Trolled Him !!

Bookings of Diwali releases “Kaithi” and “Bigil” are in full swing across the theatres in Tamilnadu. Kaithi having Karthi in the lead and was directed by “Maanagaram” fame Lokesh Kanagaraj who is going to direct “Bigil” Vijay’s next film. Both the movie’s respective production houses announced the release date on the same day and announced it as same date as well.

What do you think on this reply of S.R Prabhu ?? Comment your views !!