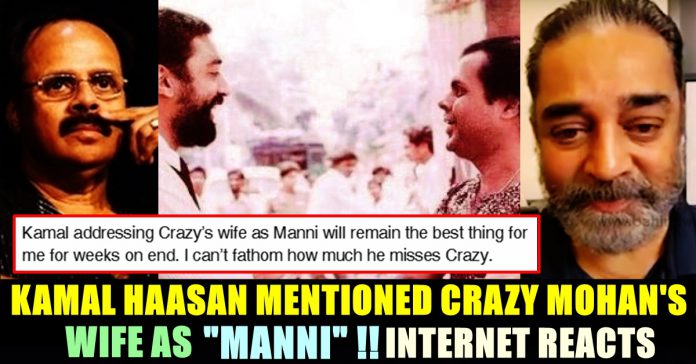 On the 1st year anniversary of legendary writer Crazy Mohan, Kamal Haasan, conducted a video conference with familiar personalities to pay tribute to his long time friend and colleague. ‘Crazy’ Mohan, prominent theatre artiste in Tamil theatre, and ace script writer for Tamil films, suffered an acute heart attack in Chennai, and was declared dead on 10th of June 2019.

Born in 1952, as Mohan Rangachari, ‘Crazy’ was an epithet that he acquired after his popular play ‘Crazy Thieves in Palavakkam’ (which subsequently was run on television as a series too) became a runaway hit. It set the tone for the rest of his career, as Crazy Mohan and his brother Balaji wrote and starred in a number of plays of similar tone and tenor, and always had their audience in splits.

Unable to bear the pain of the sudden loss, many celebrities who worked with him and who admired expressed their sorrow through tweets. Now, in his first year anniversary, Kamal Haasan organised a meeting with several cinema personalities associated with Crazy Mohan and with his family members including his wife.

“We never proposed our love to each other at all. We thought of why we have to confess it as we are very well aware about it. To be more frank, I regret for not naming these kind of relationships. I call many people as “Brother” now, but I regret for missing to call the one whom I must have called as “Brother”. Reason for that might be Balaji ( blood brother of Crazy Mohan). He would call him as “Mohan”, so I called him as “Mohan” as well.” said Kamal Haasan with tears stagnating in his eyes. “I called his wife as “Anni” only after his demise” he added.

Followed by this Kamal Haasan interacted with Crazy Mohan’s wife for a very long time and shared about the sweetest incidents of himself with the great writer. Talking about the good attributes of Crazy Mohan, Kamal Haasan said that he never bothered about receiving salaries for his work. “It is very rare to meet a person like him” said Kamal Haasan.

The way Kamal Haasan addressed Crazy Mohan’s wife throughout the video, impressed Internet users. They started lauding the actor for his gesture towards her through their tweet.

Kamal addressing Crazy’s wife as Manni will remain the best thing for me for weeks on end. I can’t fathom how much he misses Crazy.

Way Kamal sir calls her "manni" with so much respect..!😙😍

Further Kamal Haasan said that he feels glad that Crazy Mohan died that way instead of dying of old age. “If he was alive today, he will ask why we are making such a ruckus out of his death and will make a joke out of it” said Kamal Haasan to praise the legendary writer.