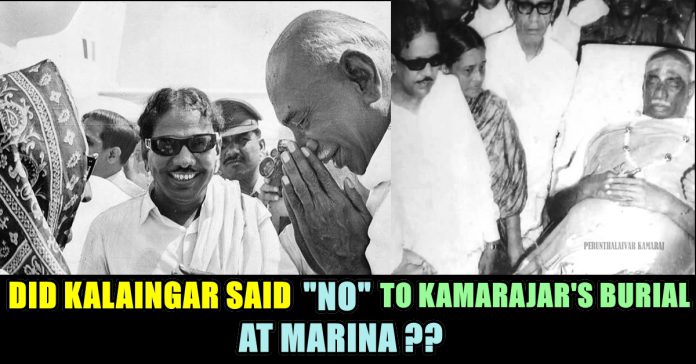 Even before DMK supremo M Karunanidhi breathed his last on August 7, a tussle was going on in the background, between the party, and the state government headed by the AIADMK. The ruling party had said no to Karunanidhi being buried after his death at the Marina, a landmark in the capital city which houses the memorials of political leaders like Annadurai, MGR, and Jayalalithaa. A rumour doing the rounds on social media argues that Karunanidhi had denied the Marina burial honour to leaders like Rajaji and Kamaraj, both of them from the Congress. The memorials for the two leaders are at Gandhi Mandapam. The counter affidavit filed by the state government before the Chief Justice of the Madras High Court, who is looking into the burial tussle, also states that Karunanidhi had allocated the land at Gandhi Mandapam and not the Marina for Kamaraj, because the latter was not a sitting Chief Minister when he passed away.

Is there any truth to the rumour? And was Karunanidhi antagonistic to the leaders who had been buried at the Gandhi Mandapam? Speaking to TNM, CR Kesavan, the great grandson of Rajaji, who was just returning after paying his respects to Karunanidhi at Rajaji Hall, says, “It is untrue. Rajaji was cremated according to his wishes. The Rajaji Ninaivalayam at Guindy was designed by Karunanidhi.”

CR Kesavan is a National Spokesperson of the Congress and Trustee of the Tamil Nadu Congress Committee. 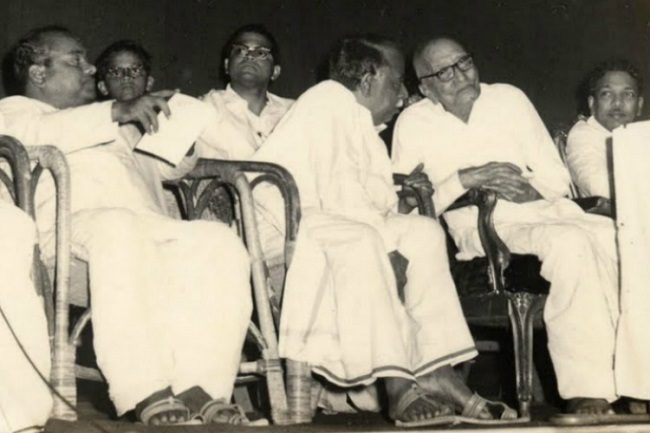 Recalling the warm relationship that the two leaders – who belonged to different political camps – shared, he says, “Even the last time when I met Karunanidhiji, about a year ago, he laughingly told me, ‘Your great grandfather lived till 94 like Periyar, both of them were stalwarts of Tamil Nadu. I’m 94 now and I’ll hit a century.’ That was the last thing he told me… There is even a famous picture of Rajaji blessing Karunanidhiji. In fact in 1971, the government of India had bestowed all the freedom fighters with a tamra patra. And Kalaignar himself went to Rajaji’s house and gave him the tamra patra which was given to freedom fighters.” A senior journalist belonging to a leading publication told TNM that Karunanidhi had not denied Kamaraj a burial at the Marina either. Like Rajaji, Kamaraj was cremated at the Gandhi Mandapam.

“Kamaraj died on Gandhi Jayanthi day and hence he was given a place in Gandhi Mandapam. There was no demand, no one asked for a Marina burial for him. Who organised the entire state funeral? Karunanidhi was the person who led the entire thing. He was the first person to reach. It was the Emergency, he supported a person who was opposing Mrs Gandhi and he stood by him throughout this period,” he says. “The way these memorials are structured is that national (party) leader memorials are at Gandhi Mandapam – all the Congress CMs, Rajaji, Bhaktavatsalam, and Kamaraj are there, while the Dravidian leaders are given the Marina. That is the broad contour. To read too many meanings into this is the product of social media,” he adds.