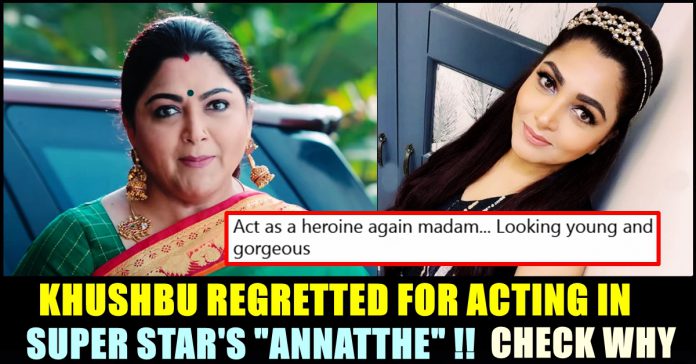 The most awaited trailer of “Annaththe” released on Wednesday evening with much expectations among fans. Booking of the film which is scheduled to release on the auspicious Diwali day has been opened and fans of the Super star actor are pretty busy confirming their tickets. Trailer of “Annaththe” promised a rural action drama with comedy, sentiment, love and other emotions. Actor Dhanush watched the 160 seconds long trailer and said that he expects a Vintage Rajinism in the Siva directorial similar to films such as Muthu, Arunachalam and Padayappa.

Watch the trailer below :

The ensemble cast of “Annaththe” included Nayanthara, Khushbu, Meena, Keerthy Suresh, Jagapathi babu, Soori, Sathish, Pandiraj, Livingston and others along with Super star Rajinikanth. With Keerthy Suresh playing Rajinikanth’s younger sister in the film, trailer suggested Nayanthara as the latter’s pair. While fans were wondering about the roles of Khushbu and Meena, trailer video confirmed that they are playing the roles of Rajinikanth’s cousins.

Both Khushbu and Meena paired with Rajinikanth in late 80s and mid 90s respectively and gave blockbuster films with the actor. Now, on seeing the trailer of “Annaththe”, Khushbu who recently went through a body transformation, regretted that she could have looked a bit thinner in the film like she is now. She adorably requested the fans to adjust and watch the film. Comparing both the pictures, the actress wrote “Then ( Annaathe ) and now .. wish I was this thin then.. but it’s ok.. manage pannungu” by adding various kind of emojis.

Many fans commented on the actress’s post saying that they always like her irrespective of her appearance. A fan went on to make a comment saying that he likes only when she looks a bit thivker. Check out some of the comments below :

Act as a heroine again madam… Looking young and gorgeous

Check out some of the recent Instagram posts of Khushbu below :