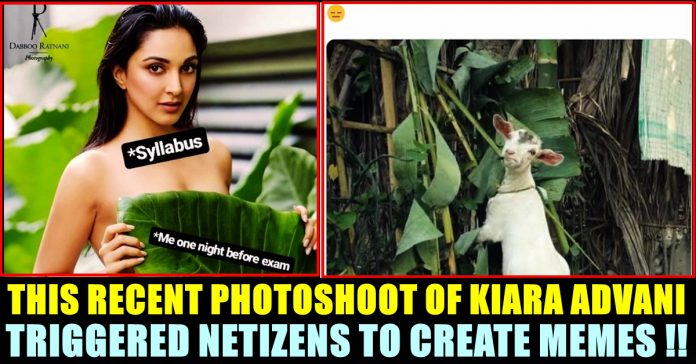 In this internet era, Photoshoots are playing a major role for the aspiring actors and models. Even top actors like Samantha, Nayanthara are participating in photoshoots occasionally to build their profile. It helped many forgotten actors to make their entry into film industry as well. The recent example for this is Tamil actress Ramya Pandiyan who became internet sensation through her recent photoshoots.

Now Celebrity photographer Dabboo Ratnani recently launched his much-awaited annual calendar for this year and it features Bollywood’s A-listers such as the Bachchans, Shah Rukh Khan, Vidya Balan, Alia Bhatt, Anushka Sharma, Abhishek Bachchan and Bhumi Pednekar among others. A day after the launch, Kiara Advani posted her picture from the calendar photoshoot on her social media accounts as well, that will leave you amazed. In the picture, the 27-year-old actress of Kabir Singh fame can be seen posing naked with a leaf.

Sunny Leone, Vicky Kaushal, Kriti Sanon, Bhumi Padnekar are some of the other actors who participated in the photoshoots. Check out their posts here :

However, the picture of Kiara Advani who is known for her appearance in Kabhir Singh, Lust stories grabbed the attention of the netizens who started making hilarious memes out of her calender shoot. Check out some of the reactions here :

This is what i seriously expect from Kiara Advani's parents 😂 pic.twitter.com/uR7VHgXFHw

On the work front, Kiara is expected to be seen in Laxmi Bomb, Indoor ki Jawani, Shershaah, Bhool Bhulaiyah 2. Comment your views on these reactions her photo is receiving !!