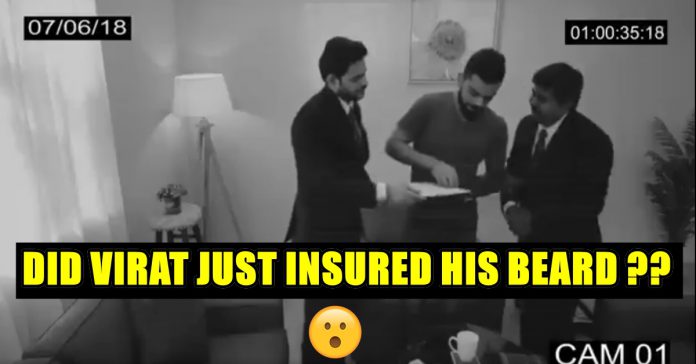 The Indian captain Virat Kohli is recovering from his neck injury currently and is set to miss the upcoming historic Test match against Afganistan. Despite not being on the field, he is trending on social media as the leaked CCTV Footage on Youtube indicates that he is insuring his beard. He is known to start the new trends and no wonder this news has left everyone stunned as the fans are eager to know more about the same.

Kohli’s fashion sense is superb as he loves to stay updated with the latest ones. The cricketer is one of the hottest properties in the market and it is no wonder that he endorses so many brands. He loves to ink tattoos with various meaning on his body and has started the trend of the same in the team with many following it. Also, the fitness culture which he has developed has made the difference to the Indian cricket. The star Indian cricketer KL Rahul was also amazed after he watched the footage and revealed that Virat Kohli is very much obsessed with his beard. In the video, it could be seen that the cricketer is taking care of the same as a couple of people were also clicking the close pictures of Kohli and his beard. Soon he also signed certain papers which clearly indicates that the most popular Indian cricketer is up to something big.

Haha, I knew you were obsessed with your beard @imVkohli but this news of you getting your beard insured confirms my theory. 😂😂 pic.twitter.com/cUItPV8Rhy Twitter was flooded with tweets soon as the news spread like wildfire and #ViratInsuresBeard was trending like anything. While some of them were in awe of the cricketer and were ready to accept the fact that Virat can do anything at the moment, few tried to eke out jokes on the matter as well. Nothing is confirmed as of now though and the man himself might come out with the announcement soon. If this news is true- To add to civil, criminal, company real estate and what not other lawyers, we can now have a new category- those who specialize in ‘beardy’ litigations 😃#ViratInsuresBeard

Did @imVkohli just spark off a grooming trend in India? #ViratInsuresBeard and we approve!

Man is just winning at life. #ViratInsuresBeard and it’s not out of the question he did. Anticipating seeing you on field with that magnificent facial hair @imVkohli

Guys do check for the leaked footage of @imVkohli how he insured to beard.#ViratInsuresBeard

#ViratInsuresBeard if one of KL Rahul’s latest tweets is to be believed Kohli who loves his beard so much that he has got insured his beard. @imVkohli Confirmation is still awaited.

This is unpredictable but Virat can do anything #ViratInsuresBeard

People are worried to get home and vehicle insured and
This icon @imVkohli has got his beard insured, adopting his own iconic style #ViratInsuresBeard 😎

Style is in his vain…
he just insured his beard..#ViratInsuresBeard @imVkohli

I must say @imVkohli has thought out of the box and insured his beard. #ViratInsuresBeard