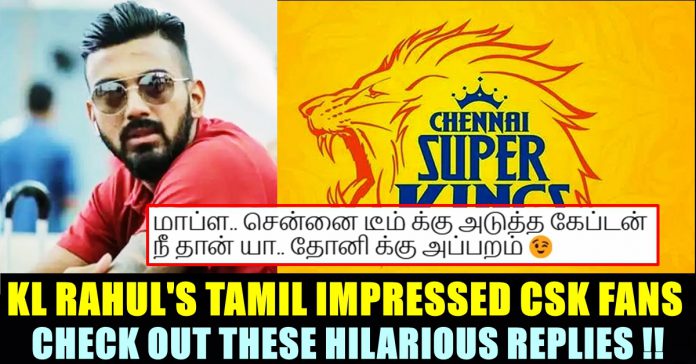 KL Rahul looks promising with the way he is captaining his Punjab team. The emerging youngster who missed victory in the first match by just 1 run, defeated Kohli’s RCB comfortably. The 132 runs scored by him with just 69 deliveries, helped his team to post a massive 206 runs as target to the opponents. Failing to score the target, RCB got all out for 109 runs.

Rahul received accolades from all the directions of cricket fraternity for his fearless innings. Rahul’s 132 became the highest score by an individual who belong to Indian cricket team. He also became the first batsman to score century in this 13th edition of IPL. Along with many fans and cricketing legends, Team Chennai Super Kings also appreciated the 28 year old youngster.

“Whattey Khel, Rahul!!” ( What a sport, Rahul) wrote the team to appreciate his innings and captaincy. Check out the tweet below :

Replying to this tweet, Rahul posted a reply in tamil language which impressed the IPL watching Tamil twitter users. “நன்றி மச்சி” (Thanks, mate) the cricketer wrote as his reply to CSK.

Enthusiastic fans came up with hilarious yet lovable reactions to this reply of Rahul. “Play well against every team except against us machi” said one of a fan whereas another fan went one step ahead and said that he is the captain of CSK after Dhoni.

Check out some of their replies below :

Maams!!! What is the procedure to exchange Murali Vijay for you?
Can we speak with Preeti Zinta about it?@ChennaiIPL ketu solu machi

u took help from murugan ashwin or google translate?🤔

Being a South Indian, Rahul know Tamil language very well as we have witnessed Murali Vijay interacting with him in Tamil in a test match that took place in the year 2018. Players of India would often use regional language to interact with each other on field in order to avoid foreign opponents understanding their game plans.

Vijay to Rahul in Tamil – "Macha, indhe over le ellam ulla than podaraan" (Dude, he's bowling everything that's going to come in)

The stump mic has caught some amazing dialogues. #SAvIND

Comment your views on this lovely gesture of Rahul !!