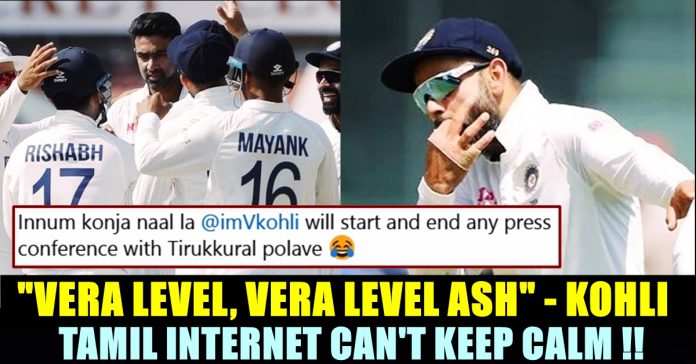 Team India is heading towards a massive victory in the second test against team England in Chepauk stadium of Chennai. Setting a mammoth target of 482, team India has already picked 7 wickets of England batsmen and the match is expected to end within today. Meanwhile, minutes before Ashwin picking the wicket of all rounder Ben Stokes, Captain Virat Kohli who became a darling of Chennai crowd, heard shouting “Vera Level” to encourage the local boy. As soon as the incident happened, Tamil twitter can’t keep calm and started reacting to it.

Ashwin got a wicket off his first ball, meticulously plotting Daniel Lawrence’s downfall. Stokes hung around for a bit and eventually mis-read a straighter ball from the off-spinner. He also picked the wicket of Rory Burns on Day three.

Captain Virat Kohli who grabbed the headlines after asking Chennai crowd to cheer by gesturing the popular “Whistle Podu”, now again grabbed their attention by shouting “Vera Level, Vera Level” in the middle. The Delhi born cricketer has always been an entertainer while playing his game. Now, this gesture from him has won the hearts of Tamil nadu cricket fans who are expressing their love towards him in social media platforms.

“Did we just hear Kohli applauding Ashwin “Vera Level, Vera Level” in the over Stokes got out ? @Sundarwashi5 @coach_rsridhar.. yaar paatha velai edhu..” asked a fan after watching this video whereas another one said “Hey!! Saami Namma Basha pesudhe”

Kohli shouting and motivating Ashwin as “Vera Level …. Vera Level” has made my day🤩💛😂

Ashwin talks in Hindi with teammates, captain greets back in Tamil. Harmony of team India <3 #INDvsENG

This is most probably the first time fans are hearing a non-Tamil speaking cricketer chirping Tamil words during a match. Previously, we have heard Dinesh Karthick, Mayank Agarwal, Ashwin, Sanju samson talking in Tamil in the middle.