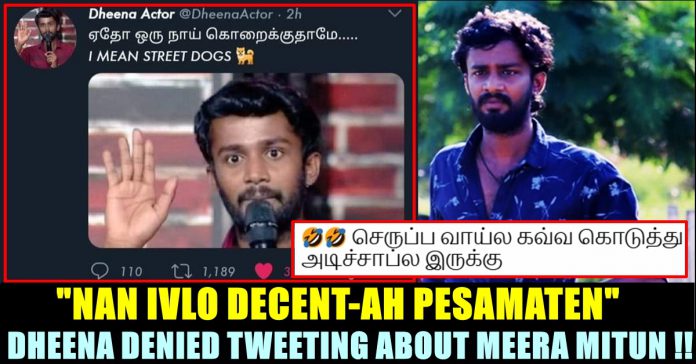 “Kalakapovathu Yaaru” fame Dheena who made his big screen debut through Lokesh Kanagaraj’s action thriller “Kaithi”, came up with a hilarious response to the videos being created by Meera Mitun, a former Bigg Boss star who has been trying to get into the limelight by defaming top-tier actors.

Followed by several celebrities including actor Suriya and legendary filmmaker Bharati Raja, Dheena responded to Meera Mitun and what makes his tweet so special is the way he referred his fake account’s tweet against Meera Mitun. The Vijay TV fame said that he wouldn’t have gave that much respect to Meera Mitun which was given by his fake account in his tweet.

“This is not my tweet.. This is fake I’d really apologize to Meera Mitun,
Bcus nan Ivalo decent a solamatan.. And nengalum avalo worth ila..” wrote Dheena in his tweet.

This is not my tweet.. This is fake I’d really apologize to @meera_mitun Bcus nan Ivalo decent a solamatan.. And nengalum avalo worth ila.. pic.twitter.com/olZkzR83s3

This tweet from the comedy actor garnered huge attention with 18 thousand likes and 4 thousand retweets. Check out some of the reactions received by this tweet :

Former Bigg Boss contestant Meera Mitun has been making baseless allegations against actors Vijay and Suriya for past few weeks. She said that they both are the product of Nepotism and involving verbal spat with the fans of the actors in Twitter. She even made abusive comments against the personal lives of the actors.

After seeing the press note released by legendary filmmaker Bharathi Raja, actor Suriya reacted to the issue being created by Meera Mitun. He reiterated a tweet he posted in the year 2018 when anchors of Sun music made a derogatory comments on him and said that he wants his fans to involve in constructive activities.

Comment your views on the way Dheena handled Meera Mitun !!