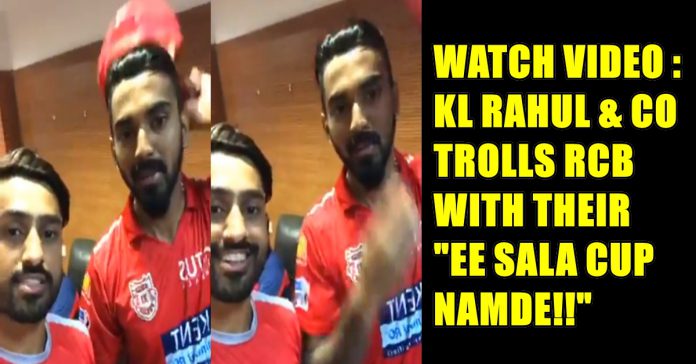 The Kings X1 Punjab opted to buy a lot of young Karnataka talent in the IPL 2018 auction, they signed up the likes of KL Rahul, Karun Nair, as well as Mayank Agarwal. All these three cricketers thus far have done a tremendous job and are keen to take Punjab all the way to the Indian Premier League (IPL) title for the first time in their history. The resurgence of veteran Chris Gayle has been a huge boost for the side as well. They were in a complete party mood after a brilliant victory against the Kolkata Knight Riders at their fortress the Eden Gardens. Ravichandran Ashwin and his team were fabulous in the run chase and Rahul was awarded the man of the match award for his blitzkrieg. After the game, the entire team was having fun in the dressing room and the two Karnataka lads Lokesh Rahul and Karun provided a gem of a moment.

They recorded a video where both players were saying, “Ee sala cup namde”, which happens to be the tagline of Royal Challengers Bangalore this season. That tagline means “Cup is ours this year” and both the players had a weird smirk on their faces. KL Rahul was formerly an RCB player, so was Chris Gayle. After registering two big wins against two in-form sides in Sunrisers Hyderabad and Kolkata Knight Riders, Kings XI are in the second top of the points table. With 4 wins in 5 games, they have 8 points in their bag. With some tough fixtures coming up, their task will not get any easy as they approach a very crucial juncture in the tournament.

The facebook live video of the teammates is here,

The team previously got off to a brilliant start in the 2014 edition but failed to keep up with the momentum. Despite reaching the final that season, their struggle in the middle phase proved to be an imperative factor. Virender Sehwag and Ashwin are two wonderful tacticians and will be trying to change the permutations and combinations at times to ensure the workload on big players remains even and the team maintains the peak for the time it matters the most.