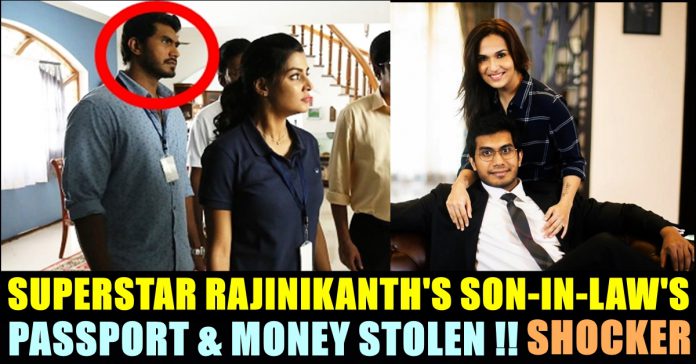 Superstar Rajinikanth’s daughter Soundarya Rajinikanth tied the knot Vishagan Vanangamudi recently in a grand wedding ceremony on February 11. Both Soundarya and Vishagan have married for the second time.

Now, to our shock, reports surfaced that Vishagan found his belongings missing in London airport. The couple reportedly planned to go for a trip to London and booked tickets from Chennai to London in Emirates Airlines.

The couple traveled on business class and reached Hebrew airport in London. After reaching London Airport, when Vishagan checked himself to take passport, he found his briefcase missing.

Besides passport, The briefcase reportedly had lot of American dollars which shook the “Vanjagar Ulagam” actor. The couple immediately made a complaint to airport authorities who made them to stay in a room. Later the matter was informed to Indian embassy and they identified Soundarya Rajinikanth and Vishagan as Superstar Rajinikanth’s daughter and son-in-law. A duplicate passport was issued to Vishagan and the investigation started to nab the accused who stole Vishagan’s belongings.

Vishagan Vanangamudi, who is one year older to Soundarya, is said to be a family friend. According to The Quint, Vishagan is also a friend of her former husband, Ashwin, whom she divorced in 2017.

Vishagan, a second-generation entrepreneur, looks after his family business Apex Laboratories Pvt Ltd, a leading pharmaceutical company, where he is the Executive Director.

After graduating from the Christ University in Bangalore, he did his Masters in International Business in the US. He has also made his acting debut with the 2018 film Vanjagar Ulagam, where he played an investigative journalist. The film was directed by his friend, Manoj Beedha.

Soundarya Rajinikanth who is a filmmaker and graphic designer by profession, in 2016, worked on the pre-production of a film titled Nilavukku Enmel Ennadi Kobam with Dhanush, Kajal Aggarwal and Manjima Mohan, but the film was later dropped. Her next directorial venture was Velaiilla Pattadhari 2, shot in Tamil and Telugu languages.