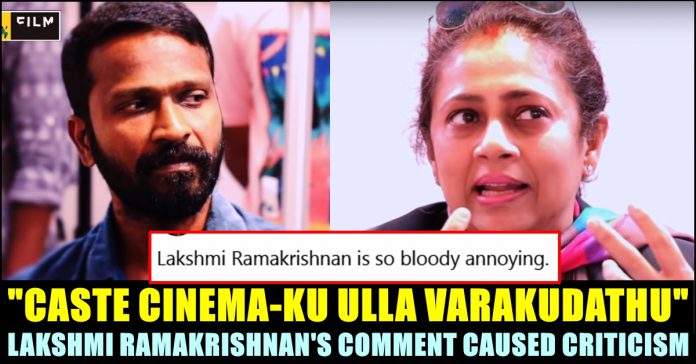 Actor, Director and social activist Lakshmi Ramakrishnan took part in the round table discussion of directors in Film companion south. Arohanam, Nerungi Vaa Muthamidathe, Ammani, House Owner are the films directed by Lakshmi in her directorial career which started in 2012.

The youtube channel Film companion South has brought 6 prominent filmmakers of this decade under one roof for a round table discussion on films. Director Parthiban, Gautham Vasudev Menon, Vettri Maaran, Rathnakumar, Chezhiyan were the filmmakers who took part in the discussion along with Lakshmi Ramakrishnan. They conversed about many advantages and disadvantages of new age cinema which helped us to understand about their way of looking their craft.

Starting from the significant trend that changed Tamil cinema in this decade to how mass hero’s films are ruining Tamil cinema to get into the next level, all the filmmakers were seen very much involved in the discussion. When Lakshmi Ramakrishnan was asked about her perception on the most significant trend of the decade, she said that women characters has been decreased. “I feel people’s taste is being groomed in a different way.” said the actor/ director who went on to add that she feels a bit uncomfortable with films based on casteism becoming a trend. “I enjoyed Pariyerum Perumal very much but few films on the same category are frightening me. I fear the reflection is opposite to what the creator is aiming at” said Lakshmi.

She further added that she feels a bit worried on violence getting into film industry as a trend. In the middle of the copnversation, Lakshmi even said that the title “Asuran” has negative connotation which was completely disagreed by director Vettri Maaran. Watch the video of the discussion below :

These comments from Lakshmi irked many people who are expressing their disappointment in micro blogging social media site. Few said that she is not even relevant to the context. Check out some of their reactions below :

How dumb is this Lakshmi Ramakrishnan, as in disconnected from contemporary cultural discourse? Embarrassing to see her grapple with the title, #Asuran. #LateToTheParty #DiectorsRoundTable

Who's bright idea was to bring Lakshmi Ramakrishnan to directors round table/ #TamilDirectorsRoundTable ???
😂😂😂🤦‍♂️

Watched this entire interview and it's amusing how Lakshmi Ramakrishnan exposes herself as an outright casteist whole talking about caste in films… https://t.co/J2s0plFh64

"I am worried about casteism into Cinema "
😁
– Lakshmi Ramakrishnan pic.twitter.com/d0IgTJc3oy

Epic! 😂👌 Her Knowledge On Arguing Debating and Solvadhellam Unmai Is Better than Cinema..

Having Lakshmi Ramakrishnan bringing in her ' Brahmins are paavam nonsense' has got to be embarrassing, eh @baradwajrangan ? Bad choice methinks https://t.co/Ru46QixAru

What do you think on these reactions Lakshmi Ramakrishnan is receiving ?? Comment your views below !!