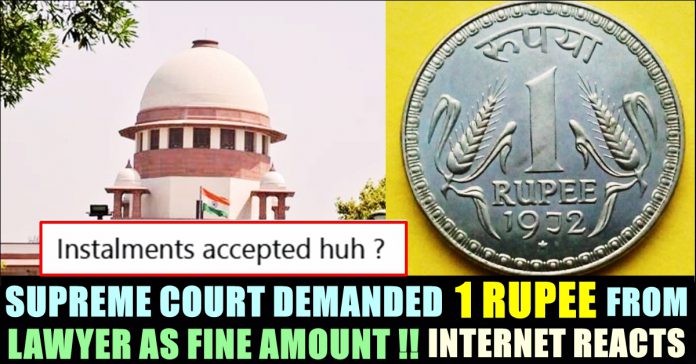 Prashant Bhushan, Lawyer and activist, has been fined Rupee. 1 by the Supreme court. He has been asked to pay the fine about by 15th of September and it is reported that he will be sentenced to three months in jail or he cannot work as a lawyer for three years if he fail to pay the fine amount. The crime he committed was, criticising the Chief Justice of India SA Bobde and the Supreme court through his tweets.

According to reports, the 63 year old refused to retract his comment or apologise, maintaining that it would be contempt of his conscience and the court. Lawyer of Prashant argued that the court must and should accept criticism as its “shoulders are broad enough”.

SC fines Prashant Bhushan ₹1 in the contempt case, if he fails to pay the fine by Sept 15, he will be sentenced to three months in jail.

A three judge bench headed by Justice Arun Mishra, Justice BR Gavai and Krishna Murari pronounced the verdict. Justice Mishra said that the freedom of speech can’t be curtailed but rights of others needs to be respected during the course of the hearing. The apex court had on August 14 held Bhushan guilty of contempt of court over his derogatory tweets against the judiciary, saying they cannot be said to be a fair criticism of the functioning of the judiciary made in the public interest. Bhushan reportedly accepted the punishment and is going to pay the fine amount.

As soon as the news surfaced, Internet using people started reacting in various ways. Many made fun of the amount required from Bhushan as fine. “Can’t imagine how he is going to pay such amount in this short” wrote one of a twitter user whereas another one said “Shocking, funny and bizarre jugement. If Prashant Bhushan refuses to pay, which he should, he should be serving longest jail term for such a fine”

Shocking, funny and bizarre jugement. If @pbhushan1 refuses to pay, which he should, he should be serving longest jail term for such a fine

As common Indian, I feel humiliated by SC decision to impose a mere Re 1 fine on Prashant Bhushan for contempt of court.

I am a common citizen.

I am not eminent.

I don't know 3000 eminent citizens to sign open letter for me.

I cannot utter a word against Supreme Court.

Can #PrashantBhushan make few more tweets if he doesn't have a change??

Comment your views on the fine amount Supreme court demanded from Prashant Bhushan !!