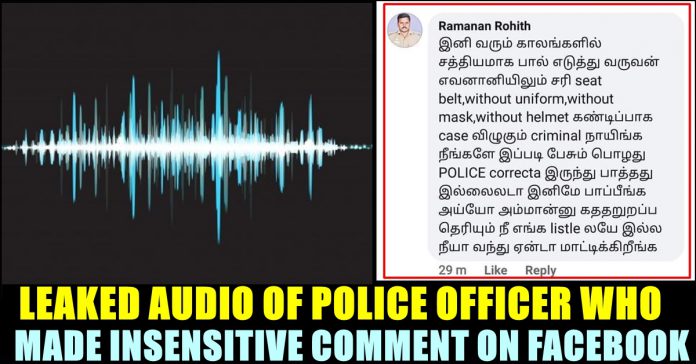 Followed by the suspension of M.Sathish Muthu, a police personnel attached to the armed reserve wing, an audio conversation of another police officer released. Sathish Muthu got suspended after he made a derogatory comment on a Facebook post regarding the custodial death of Jayaraj and Fenix. Reacting to the demise of the Father and son duo, the milk vendor’s association announced that they will not provide milk to the police personnel, standing in solidarity with the victim’s family.

One such milk vendor, announced about this decision through his facebook account. M. Sathish Muthu, an armed reserve police constable deployed on duty, in Chennai commented “Hey you kiddos, we were looking for people to kill them in another custodial death, Now we got you, you guys have any anus hole?” he asked through his comment.

The screenshot of this particular comment, went viral across the social media platforms and the matter was taken to senior police officers who suspended him. A senior police officer said that Sathish Muthu gave his Facebook ID and password to many of his friends and one of them could have done it. “He is suspended for being irresponsible and for tainting the reputation of a police personnel” he said.

Now, audio conversation of another police officer, who made a similar comment on Facebook has been released. In his post, the police officer whose Facebook name reads as “Ramanan Rohit”, wrote “No matter which milk vendor comes in our way in future, we will definitely register a case against him.” worte Ramanan in his post. “You haven’t seen a good cop in your life right ? You will see soon.” he wrote in the post.

Now, an audio conversation of himself with a lawyer surfaced in Internet. In the audio, the police officer can be heard failing miserably while trying to lie to the lawyer.He was questioned by lawyer to answer on why he called milk vendors as Criminal dogs. “You have said that people will scream, so you are accepting that you will beat people ??” he asked.

Hear the audio below :

The Lawyer further went on to expose the obscene pages liked by the police officers. He also questioned him on why he is supporting a particular caste through his facebook account and his facebook profile. Constable who couldn’t argue further, agrees his mistake and says that he has nothing to talk further at the end of the audio.

In Sathankulam, Police officers nabbed father and duo for no appropriate reason and beaten them black and blue in lockup. They both died after a government doctor helped police to produce fake medical certificate to the magistrate. This incident created huge outrage across the country as influential people including cinema celebrities and sports personalities raised voice against the Police officials who are responsible.