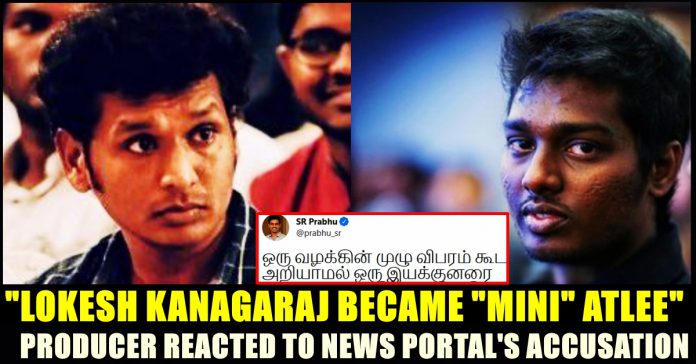 The most popular Polimer news portal came up with a report on the evening of Saturday accusing director Lokesh kanagaraj of stealing the story of his blockbuster film “Kaithi” from a prisoner. They termed the filmmaker as “Mini” Atlee in their title and blatantly said that he stole the story from a prisoner. Producer S.R Prabhu of Dream Warrior Pictures who produced the film immediately came up with a tweet defending his director. He who seemingly got frustrated, said that it is very cheap to degrade a filmmaker without knowing about the full details of a case and asked the news channel to advice the admin.

Lokesh Kanagaraj who debuted in the year 2017, grabbed the attention of Tamil audience through “Maanagaram”, a hyperlink drama set in Chennai city. During the final stages of the post production work of his second film “Kaithi”, Lokesh got an opportunity to direct actor Vijay, one of the very few highest paid actors in Indian film industry. After impressing the “Bigil” star with his intriguing script, Lokesh Kanagaraj decided to cast the busiest Vijay Sethupathy in the antagonist role. While emerging filmmakers are in desperation to work with any one of these stars, Lokesh managed get both of them on board for his third film.

Now, he is currently busy working on his fourth directorial “Vikram” with “Ulaganaayagan” Kamal Haasan. In the meantime, a report got emerged in Polimer news channel saying that the filmmaker stole the story of his second venture “Kaithi” from a prisoner. Having no heroine, songs or flashback, “Kaithi” film impressing the audience for its strong and intense plot. It revolves around a story of a released prisoner who spent 10 years of Jail sentence. On his way to meet his daughter for the first time, the protagonist was forced to help a senior police officer from deadly drug lords.

The film was widely compared with films such s “Con air” and “Assault on Precinct no 13”. The latest report had said that the story of “Kaithi” was written by a prisoner on “Puzhal” jail. It said that Rs. 4 crore was demanded from producer S.R Prabhu as a penalty for buying the story from the prisoner by paying him Rs.15,000 as advance and making the entire film which collected rs.105 crores.

The story of “Kaithi” belongs to a Kerala based prisoner named “Rajeev” who spent his sentence in the “Puzhal” jail regarding a murder case, says the report. He got released from the jail in the year 2007 and met producer S.R Rajan with his friend and narrated the story to him. The producer reportedly paid Rs.15,000 as advance and promised to pay the rest when the story gets made as a film. Rajeev was not informed about anything regarding it after that, says Polimer.

Recently, he watched “Kaithi” when it was played in Television and got shocked to realize that his story was made as a film. He who believed that one part of his story was made as a first half, approached court with the help of a lawyer with the evidences he got. Based on that, Court has ordered to ban producer S.R Prabhu to produce the sequel of the film and also a notice was sent to him to pay Rs. 4 crore as a compensation for making a film with Rajeev’s story without his permission.

When the producer was approached, he reportedly said that the story of the film belongs to Lokesh Kanagaraj and added that he will answer to the accusation if the notice reaches him. Now, on seeing the article with a title saying “Mini Atlee aana Lokesh Kanagaraj” (Lokesh Kanagaraj became a mini Atlee), Producer S.R Prabhu uploaded a tweet saying “It is cheap to degrade a filmmaker without knowing the full details of a case. Cheaper when it’s done by a news portal. Advice your admin, sir” in Tamil.