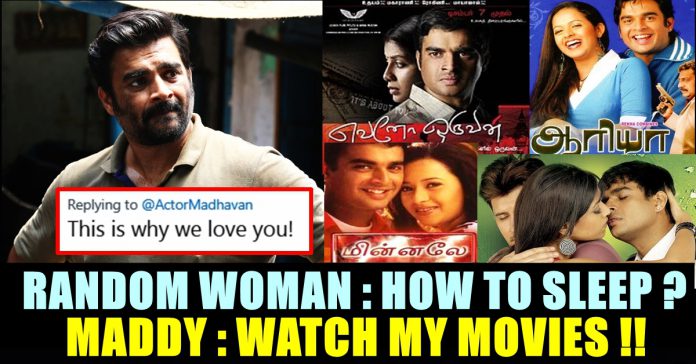 The 48 year old who is very much active in social media often interacts with the fans who mentions him. Today, twitter user Latha Srinivasan posted a tweet asking how to cure Insomnia to her followers.

What is the cure for insomnia

To our surprise, actor Madhavan who saw the tweet took time to reply to it. In a humorous way, he asked Latha to watch his movies to sleep faster. The tweet of Maddy read as “Oh try watching some of my movies… that I have indulged in.. 🤣🤣🤣🙏🙏”

Oh try watching some of my movies… that I have indulged in.. 🤣🤣🤣🙏🙏 https://t.co/ruYk8trALb

This humble and witty tweet from a senior actor who acted films across the country was unexpected and people who witnessed this tweet loved him more than before. Check out some their reactions here :

This is why we love you!

Love your innocent quips… But shows your humbleness more than anything.. #kudostothat

Oh don't be so hard on yourself . U have been part of some great movies that I have ever watched.

One of a fan said that the movies of Maddy would not let anyone sleep. He even mentioned Maddy as drug. Madhavan who saw that reply laughed his heart out :

Meanwhile, another female fan of Madhavan shared a picture of him and said “He’s so hot, I wanna cry. Why you be so hot 😭😭😍😍” to which Maddy said that he wants to cry too that he now need to get the shape back.

What do you think on the way Madhavan interacting with his fans and followers ?? Let us know your views !!