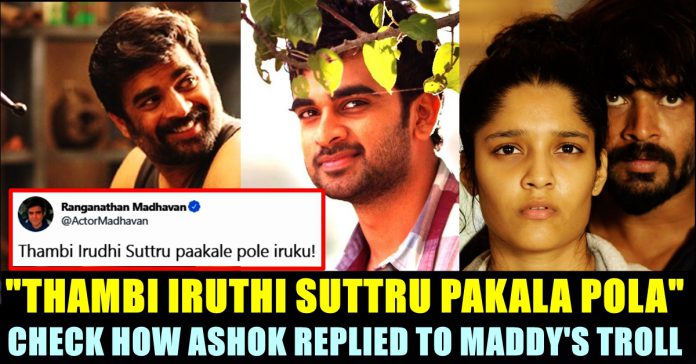 Debuted as one of the lead in Soodhu Kavvum, Ashok Selvan registered his face to Tamil cinema audience by acting in films like Thegidi, Pizza 2 etc. His last venture was Kootathil Oruthan in which he paired up with Priya Anand.

The actor who is desperate for a breakthrough is all set to appear in “Oh My Kadavule” first look posters of which is doing rounds in social media. In the film he is going to be paired with Ritika Singh, “Irudhi Suttru” fame. He is also making his Malayalam debut by sharing screen space with Mohan Lal which was titled as “Marakkar : Arabikadalinte Simham”

The posters are released by top celebrities such as Jayam Ravi, Anirudh Ravichander and Madhavan. Ashwath Marimuthu is going to make his directorial debut through this movie.

Check out the poster released here :

Meanwhile actor Madhavan while sharing the third poster, added a caption by mentioning the reference of Ritika’s character in “Irudhi Suttru” movie in which played the lead role. The poster showed Ashok Selvan sitting beside Ritika with wounded eyes and by faking a smile. They both were seen holding tea glass.

Madhavan while sharing the poster wrote “Thambi Irudhi Suttru paakale pole iruku!” in his official twitter account which left his followers in splits.

Check out his poster here :

Check how some of his 27 lakh followers reacted :

Ashok Selvan himself reacted to the same by writing “Hahaha Ritika unga student nu marandhutaen Madhavan sir! 😆Thank you so much for doing this.”

Hilarious. ain’t it ?? Comment your views on this strategy used by the film crew to promote the film.