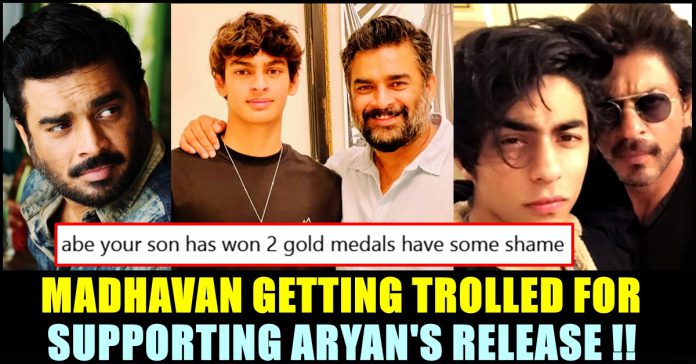 Actor Madhavan’s tweet after Aryan got his bail from court garnered huge attention among the users of the micro blogging social media site. Bombay high court issued bail for Aryan Khan who was taken into custody by the Narcotics Control Bureau on 3rd of October. Pan Indian actors such as Madhavan, Sonu Sood, Sanjay Gupta, Swara Baskar, Mika Singh have now shared their reactions on social media and expressed happiness on the court’s decision to grant Aryan bail.

After his bail was rejected recently by a special NDPS court, Aryan Khan, son of Bollywood Super star Shah Rukh Khan continued to spend his time in jail. It has been reported that Aryan’s appeal against the order will be heard by the Bombay high court on 26th of October. He who is currently lodged in Arthur Road Jail has been ordered to stay in jail till 30th of October. Meanwhile, the chat details of himself and actress Ananya Pandey is making headlines across the country.

The anti-drugs bureau said that the raids produced a haul of 13 grams of cocaine, 21 grams of charas, 22 pills of MDMA and 5 grams of MD. Though there were no drugs were found on Aryan Khan, officials of the anti bureau drugs said that his Whatsap chats are incriminating. The officials, reportedly raided the rave party in disguise on the Cordelia Cruise Ship which was on its way to Goa. Latest report said that Aryan and others were arrested and has been sent to 14-days judicial custody.

Many celebrities from Bollywood has extending their supportive hand to Shah Rukh and his wife. Salman Khan was among the first stars who visited Shah Rukh Khan and Gauri. He was snapped outside the “Chennai Express” actor’s house after the arrest of 23 year old Aryann Khan. He reportedly met Shah Rukh Khan and his wife for sometime and left. Now, after Bombay high court granted jail for the son of the “Dilwale” actor, Madhavan came up with a tweet saying that he feels relieved as a father.

“Thank god . As a father I am So relieved .. … May all good and positive things happen” read the tweet of Madhavan.

Thank god . As a father I am So relieved .. … May all good and positive things happen.

The tweet garnered various kind of reactions from Twitter users. With Shah Rukh Khan fans praising Madhavan, many trolled the actor for comparing his son with Aryan. Check out some of the reactions below :

abe your son has won 2 gold medals have some shame https://t.co/3sKuYE3QhM

Do send your Son with SRK son on trip a d partying from now on for support https://t.co/CdVpNEE5RJ

I pray to God that your son doesn't get into drugs & learn something from this episode.

As a father you should teach this to your son. Don't set wrong examples. So far we are proud of him and hope he continues to make the nation proud. Ram Ram 🚩🚩

I have very high respect for you or I did until this tweet!. I understand that you have to support evil to survive in Bollywood but for some reason I always thought that you were different!💔💔

Dear BJP IT cell , you can't use any Tamil actor as you wish for you PR stunts. When you do so you'll be ashamed like this 😂 https://t.co/gRktrgznkp

Lesson learnt: When your father is a powerful rich man, everyone feels for you as a father. Otherwise, you're just a criminal. https://t.co/4uakP3fbS6

Two minutes of silence for everyone who was tweeting his son's pic, giving gyaan about parenting, culture, falana dhimkana 😂 https://t.co/MMSHlM3sH6

Weren't people hailing him as some kind of ideal father lol
Dumbos still don't understand any Bollywoodia is a Bollywoodia https://t.co/DobkyG4iX4