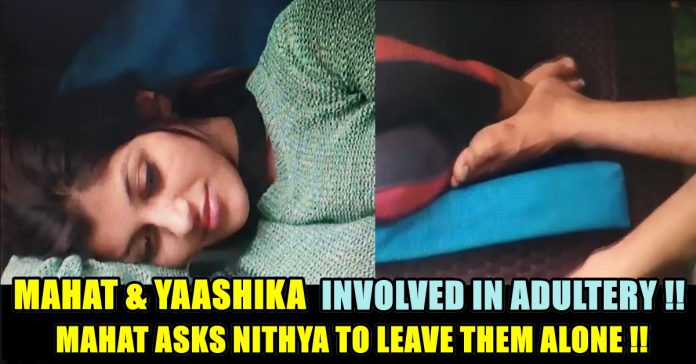 Netizens are fuming at Yashiuka aanand, Mahat Raghavendra, Aishwarya Dutta and Shariq Haasan over their behaviour on Bigg Boss Tamil 2. Their actions have been called “vulgar” while many are wondering if the Kamal Haasan-hosted show is only for adults.

In the past couple of days, there were several instances which did not go well with the conservative audience, especially family viewers. Notably, the two girls, Aishwarya and Yashika, pampering Mahat on his bed has left many raising eyebrows. Shariq Haasan and Aishwarya’s proximity in the latest task has been slammed for the same reasons. Also, on Wednesday’s episode (June 27), the dance performances of Aishwarya and Yashika Bigg Boss tamil 2 have come under the scanner.

The recent developments has left conservative viewers of the show questioning if the TV channel is attempting to spice things up in the Bigg Bos house in order to grab the attention of the younger demographic of the reality show’s audience.

Mahath who is seen showing vulgar gestures while the girls are performing in the previous day has been involved in a cheap activity which was caught on camera. He already caught while trying to touch Yashika’s hip intentionally. He also said “it is tempting” while Balaji asked what he is doing to her. He also laid in between Aishwarya and Yaashika to prank other contestants. In a recent video he was caught keeping his hands near Yashika’s hip where all the other contestants are standing around the dining table. When Balaji see him touching her he suddenly threw something at Mahat where Mahat stepped back laughing. The other thing which is shocking is Yaashika doesn’t even reacted a bit to what was happening to her. Aishwarya Dutta who is standing near them also seems to be aware of what’s happening around which is evident through her grin. watch the video below :

Now today Mahat and Yaashika involved in extreme romance. As they both pretending like sleeping Mahat slowly touching Yaashika’s leg with his leg where Yaashika doesn’t even uttering a single word in an opposing note. When co-contestant Nithya disturbs them Mahat says “Why are you disturbing a “love birds” like this ? For this Nithya replies as “Open your eyes and do anything!!” for this Yaashika blatantly replying with a grin in her face as “Eyes will close automatically while doing some things” which will leave you in shock. Mahat introduced his girlfriend to Kamal Haasan in the opening ceremony in notable.  watch the video below :

What do you think on this series of adult activities between Mahat and Yaashika ?