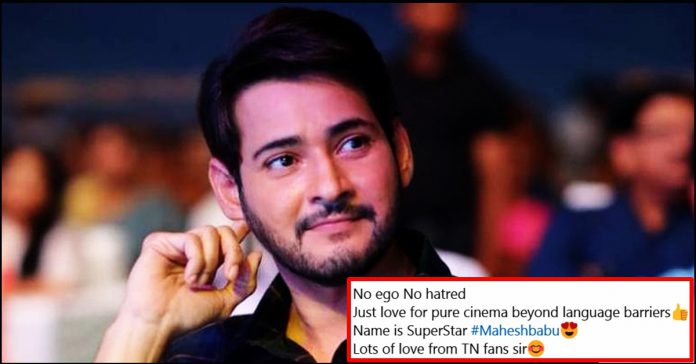 Mahesh Babu, one of the most loved south Indian star never missed to appreciate true talents. His attention towards Tamil cinema in recent times is astounding and the actor getting lauded by cinema fans of Tamil speaking region for his honest gesture.

The actor who finished watching Karthi starrer “Kaithi”, immediately took to twitter and expressed his thoughts about the movie to let his 85 lakh followers of Twitter to know about it. He appreciated the film by terming it as “New age filmmaking” and welcomed the change of not placing songs in between the movie.

“Khaidi… new age filmmaking…thrilling action sequences and stellar performances in a gripping script… no songs!! A welcome change 🙂
Congratulations to the entire team” read the tweet of Mahesh Babu.

“Kaithi” film released along with highly anticipated “Bigil” and running successfully despite of the star value of the Vijay starrer. Having no heroine, songs or flashback, “Kaithi” film impressing the audience for its strong and intense plot.

The film revolves around a story of a released prisoner who spent 10 years of Jail sentence. On his way to meet his daughter for the first time, the protagonist was forced to help a senior police officer from deadly drug lords.

On seeing this gesture of Telugu Superstar, fans of Tamil cinema moved and expressed their love towards the actor for his selfless attitude in the comment section of his tweet. Check out some of them below :

Really i am very surprised to see your tweets about good movies like #asuran and now #kaidhi , no ego, not even worried about hyping Tamil market,best wishes for your upcoming projects ❤️

It is notable that Mahesh Babu earlier appreciated “Asuran” movie directed by Vetri Maaran. The actor said that the film was raw, real and intense content by tagging the makers of the movie.

Being a hero with highest commercial value, Mahesh Babu keeping eyes on content oriented films is indeed a healthy progress for the film fraternity of South India. Comment your views on this kind gesture of Mahesh babu !!