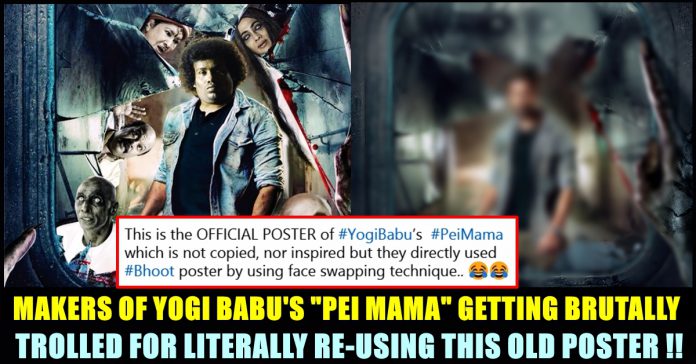 Ahead of the theatrical release, Yogi Babu starring “Pei Mama” is getting brutally trolled by the users of Internet for literally re-using the poster of a 2020 Bollywood film “Bhoot” which had Vicky Kaushal in the lead role. Directed by Sakthi Chithambaram of “Charlie Chaplin”, “Englishkaaran”, “Kovai Brothers” fame, the film has Yogi Babu in the lead role with Motta Rajendran, MS Bhaskar, Singampuli and Kovai Sarala doing the supportive roles. Soon after the poster got released, Netizens started roasting the makers of “Pei Maama” for their lack of creativity.

“This is the OFFICIAL POSTER of #YogiBabu’s #PeiMama which is not copied, nor inspired but they directly used #Bhoot poster by using face swapping technique..” a social media user wrote in his tweet to troll the “Pei Mama” crew members whereas another one asked whether he is a “Pei Mama” or “Copy Mama”

This is the OFFICIAL POSTER of #YogiBabu’s #PeiMama which is not copied, nor inspired but they directly used #Bhoot poster by using face swapping technique.. 😂😂 pic.twitter.com/PAkajS7vvQ

Few fans are arguing that the poster is a spoof of the Bollywood film. In that way, a spoof film is generally made on a popular film that is very well known to the target audience. Majority Tamil audience doesn’t know about the existence of the Vicky Kaushal starrer. “Bhoot-Part One : The Haunted Ship” is also a horror film that was directed by Bhanu Pratap Singh and jointly produced by Karan Johar. Makers of “Bhoot” were planning to make a franchise over the film but the first part tanked at the box office which stopped the filmmakers to make a sequel.

“Pei Mama” which is also expected to be a horror flick, has Malavika menon, Rekha, Imman Annachi, Ramesh Kanna in the supportive roles. We have to wait till the film to get release to know whether the makers have only copied the poster or the whole movie “Bhoot”.