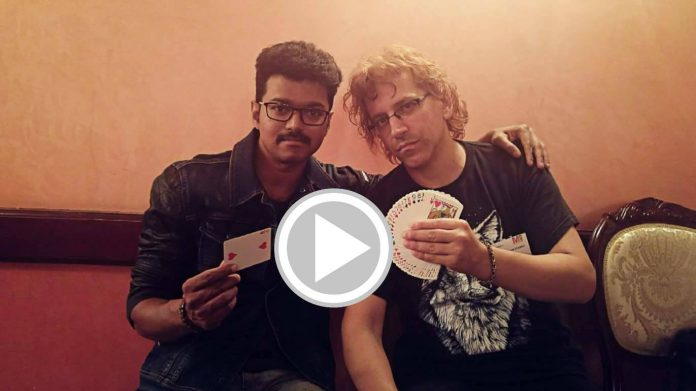 The Vijay starrer, blockbuster movie Mersal has some sequences wherein the actor Vijay in the role of Vetrimaaran performs mindblowing magic tricks. Mersal  is also the first Indian film to be shot in Macedonia. Since Atlee and Vijay were keen to make the whole film authentic, three internationally renowned magicians – Gogo Requiem (Macedonia), Dani Belev (Bulgaria) and Raman Sharma (Canada) – were roped in to train Vijay to perform several magic tricks in the film.

In a video message, Requiem appreciated his new-found popularity among Indian fans, while heaping praises on Vijay and director Atlee.  I mean I am bombed. Thank you so much, but I don’t deserve this. I am just an ordinary guy. I had the pleasure to work with Mr. Joseph Vijay in May when the part of the movie was shot in Macedonia, Skopje,” he said. He seems to have got the attention of fans after he shared a picture of himself posing with Vijay on his Twitter page. “Joseph Vijay…one of the most popular actors from India/Tamil. I had a huge honor to work with him in May 2017” All the three magicians were quite impressed with Vijay’s dedication to learn the tricks and termed him as a perfectionist. Talking about his experience, Gogo Requiem said, “I had my reservations over teaching someone things that usually take years to perfect. But I was quite astonished when Vijay got everything at one go. He’s a very good observer and a quick learner. Not just that, he’s also an incredible actor and an awesome magician too. I wasn’t the only one; there were two other guys too, Dani Belev and Raman Sharma. They were also involved in the process along with 70-80 people from India who were all helping in the making of the movie in Macedonia in May, 2017.” On the other hand, Raman Sharma complimented Vijay saying, “If Vijay decides to become a magician, he’ll be one of the best in the world.”