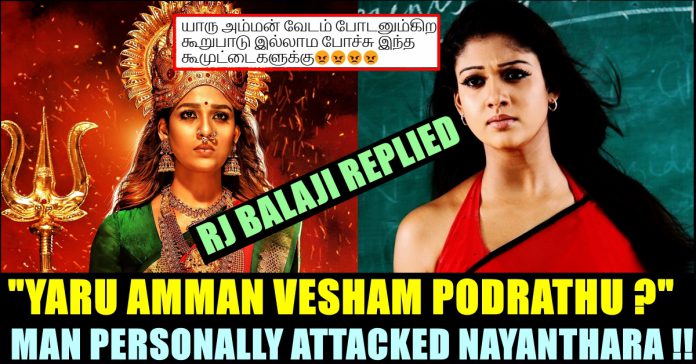 First looks of Nayanthara’s upcoming movie “Mookuthi Amman” released by its director RJ Balaji on 29th of February. RJ Balaji needs no introduction to the people of Tamilnadu as he is a popular radio jockey, presenter, comedian and actor based in Chennai. After appearing few films as comedian RJ Balaji made his debut as protagonist in his L.K.G film which received positive response from the audience which resulted as success in box office.

It is well known that RJ Balaji also did writing for his debut film. Now the multi talented artist’s next project is going to have Lady Superstar Nayanthara in the lead. The film which seems to be a female oriented one is titled as “Mookuthi Amman”. Check out the first look posters below :

As always, humbled by all your love and support ❤️ Thank you for the phenomenal response for the first and second look of #MookuthiAmman .!!!🙏🙏🙏 pic.twitter.com/m1kROaPcgB

Nayanthara who is known for her stardom in Kollywood industry for acting along with top actors such as Rajinikanth, Ajithkumar and Vijay is also known for few of her female oriented films. Aramm, Maaya, Kolamavu Kokila are some of her notable films in which she played the role of a protagonist.

As we all know, Internet is not a place to expect 100% of positivity. There will always be a sector of people who would spew hatred, no matter how good the things we post are. On seeing the first look of “Mookuthi Amman”, one of a twitter user who is named as “Durgai Raj” said that they wrongly casted Nayanthara for “Amman” role, in a way of assassinating the personal character of actress Nayanthara. Few years ago, the actress faced similar problem when she did the role of “Seetha” in Rama Rajjiyam.

This comment from Balaji received mixed reactions from the users of Twitter. Few even stated that Balaji is planning to promote the movie by replying to negative comments. However, an artist’s job is just to portray the character they offered. Comparing the reality with an actor’s personal life is no less than being absurd.

Comment your views on this reply of RJ Balaji !!