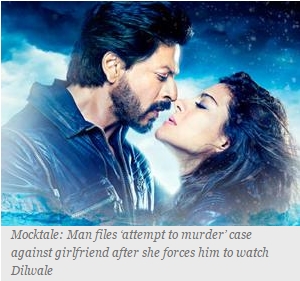 A 25-year-old man from the city today filed a criminal case against his girlfriend of 2 years accusing her of attempting to murder him by repeatedly forcing him to watch recently released Shah Rukh Khan starrer Dilwale, which has mentally deranged thousands so far.

Immediately after breaking up with her, the man went straight to Mahim police station and lodged an FIR against her.

“I just had a small argument with her yesterday and this is what she does to an honest boyfriend like me. She is a coward and a psychopath,” the man tweeted from his account while waiting at the police station.

On the other hand, the girl in her defense claimed that she was asking his boyfriend to go for Dilwale only to brighten up his mood after the argument.

“If she really loved me and cared about my mood, she would have forced me to go for Hate Story 3 or Bajirao Mastani. Since she was adamant on only watching Dilwale, her motive is pretty much evident,” the man argued.

When pointed that he wouldn’t have gone alone and she too would have watched the film along with him, so it really can’t be an ‘attempt to murder’, the man shot back, “She hardly ever looks up to the screen when in movie hall. Half the time she is in the washroom of multiplex clicking selfies and the other half, she spends counting likes on the same selfies uploaded on Facebook.”

Mocktale spoke to the police officials who confirmed that boyfriend had a pretty strong case.

“We are glad he came to us. Because if he would have gone and watched Dilwale, we would have been compelled to charge him too under ‘attempt to suicide’ case,” said the Mahim station incharge.

Stories in Mocktale are works of fiction intended to bring a smile to your face. They bear no connection to events and characters in real life.
Source : TOI