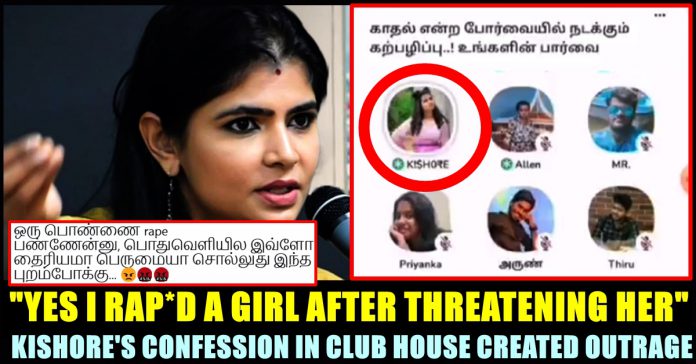 In a public club house room, a man named “Kishore” confessed that he had “raped” a woman after threatening her while hundreds of people listening and the incident created a furore in Internet. Screen recordings of his confession are doing rounds in social media platforms with people demanding immediate arrest against him. Singer and Me Too activist Chinmayi shared the screen recording in his twitter timeline and tagged Tamil nadu police by asking them to take legal action against the individual.

Being an invitation-only social media app, Club house mobile application lets users to communicate in voice chat rooms that accommodate groups of thousands of people. The audio-only app hosts live discussions, with opportunities to participate through speaking and listening. After Twitter Space came to the trend, Club house which is exclusively made for group voice chat, is being widely used by online users.

Discussions on various topics such as Sports, Business, Career, Education, Cinema, Love, Relationships, Sex are being conducted in club house. Those who are creating a new room with a title are called as “Moderators” and those who are joining in it after seeing the room’s name are called as “Listeners”. Moderators can choose people from “Listeners” to speak on the topic and the listeners are provided a “hand raising” option to let the moderators know that they are ready to speak.

On 5th of July, a room was created in the name “Kaathal ennum Porvayil nadakkum Karpazhippu-Ungal Parvai” (Rapes in the pretext of Love- your views) by a number of men. People who had problem with the title, entered the room and started expressing their disagreement over it. During the argument, a man named Kishore confessed that he raped a woman after threatening her and the moderator (presumably his friend) had kept such title for people like himself.

“Allen kept such title pointing out people like me. I have a relationship and we had sex even last night. That’s not rape. In my previous relationship I did “accuse”. I “accused” a girl, threatened her and raped her. That’s what his title questions” Kishore could be heard saying. The confession had created shock waves to the listeners and the users of other social media platforms who came across the audio.

Here’s the confession made by Kishore :

People who were in the room confronted Kishore and asked him to expose his identity.

Screen shots of the Instagram account of Kishore were tracked from his club house account and are being spread widely by public, demanding legal action against him. Sharing the audio, Singer and MeToo activist Chinmayi tagged Tamil nadu police and said “Dear Tamil nadu police. please take note and take cognisance.” through her tweet.