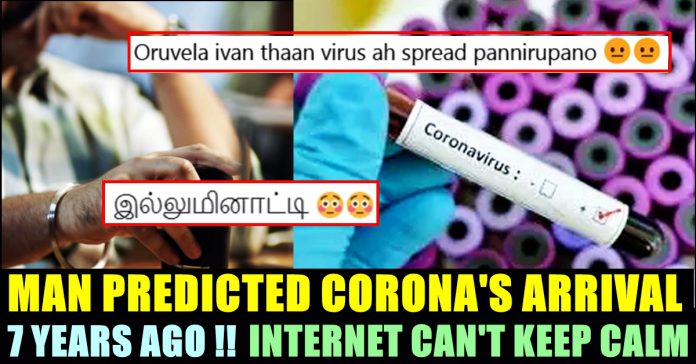 Would you believe that a tweet from a guy predicted the arrival of Coronavirus seven years ago ? Well, you have to as there is a solid evidence for it in the micro blogging social media site. Coronavirus is the biggest threat across the world right now. Having killed more than 18,000 people around the globe, many countries forcing its citizens to stay home to prevent the situation from getting worse.

The tweet which was surfaced on 3rd of June, 2013 was posted by a twitter handle named as “Marco”. “Corona virus….its coming” he wrote in his tweet through his Android phone around 9 PM. Check out the mysterious tweet below :

The tweet received 1 lakh thirty thousand likes so far with enormous number of reactions. His other mysterious tweets were also digged up the twitter users. One among those astonished twitter user wrote “HE TRIED TO WARN US BUT WE DIDN’T LISTEN” whereas another said “May be he is real time traveller”. Few even made fun of the guy who posted his last tweet during the year 2019.

7 years we had to prepare… we have failed as a species 🙁 https://t.co/Q1zPbx4SQT

Marco are we all gonna die pic.twitter.com/dYe290XbNQ

come out when you're ready pic.twitter.com/a4B5m8C9xR

To everyone who is freaking out at the coincidence:
Coronavirus is a FAMILY of viruses. It also includes SARS, MERS-CoV & even common cold & flu viruses.

Don't call anyone a time traveller till they claimed Covid-19 will arrive!

Thank you for coming to my Ted talk. 🙏

So many people are keeps on wondering how in the world Marco predicted. Though the Corona virus is existed during 2013, the way Marco said “It’s coming” terrorized the users of twitter. Indian Government announced shutdown to make people stay in indoors to avoid the deadly Coronavirus from spreading. Community spread is the dangerous threat to our society right now. To avoid it, people are across the world are forced to maintain social distancing.

A thriller Novel Eyes of Darkness which was written by Dean Koontz in 1971, also mentioned a virus named Wuhan-400. In the book, the virus was created as a weapon in a laboratory. It talks about a Chinese military lab that creates a virus as a part of its biological weapons program.