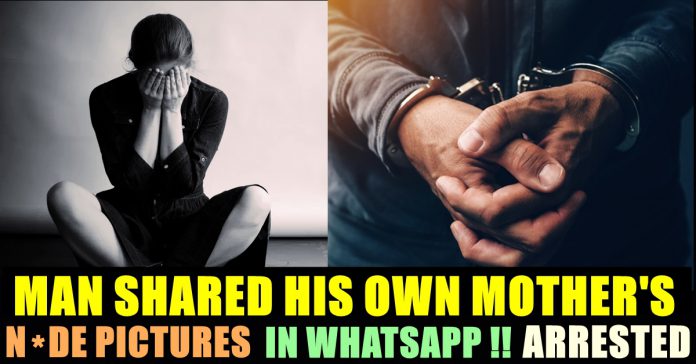 In an unexpected turn of events, a 50 year old man identified as Deepak allegedly shared his own mother’s nude pictures and blackmailed her to share it more in order gain ownership of their ancestral house. This shameful incident took place in Kota district of Rajasthan and the full name of the accused is Deepak Tiwari. Police have made the arrest against the accused.

Reports suggested that the pictures of the elderly victim shared in a Whatsapp group which had their relatives. Police confirmed that Deepak involved in this vicious activity to make her mother handover the ownership papers of their ancestral house. The accused has been sent to judicial custody after he was produced in the court of the additional chief judicial magistrate.

The issue between the same family members took place after the demise of the victim’s husband who died 20 days ago, said Tarachand, the incharge of Dadabari Police station. The ancestral house located in Shivapura under Dadabari police station limits.

“I was performing “hawam” for my late husband When my son (Deepak Tiwari) came and sprayed some substance on me. I started feeling itchy and suddenly went to the bathroom to take a bath.” said the 75 year old victim said in her complaint to the police. The accused is suspected to have clicked pictures of his mother at that time. He forwarded the pictures on his relatives Whatsapp group to threaten his mother.

The relatives who saw the pictures in Whatsapp, informed about it to the victim the next day. As soon as hearing about it, the woman approached the police and registered a complaint. The arrest against Deepak took place on 16th of May. “Deepak attempted to blackmail his mother and to defame her to pressurize her on handing over the ownership of the house to him” said Police to the media.

Deepak was booked under sections 509 A, 509 B (Outraging a woman’s modesty) of Indian Penal code and section 67 of the IT act, said officer Tarachand who added that the pictures of the victim were not found in his phone as he deleted it after sometime.

This news created huge outrage among the users of social media platforms as they started slamming the accused for his disgustful act. They are demanding severe punishment for the culprit to prevent such things from happening in future.