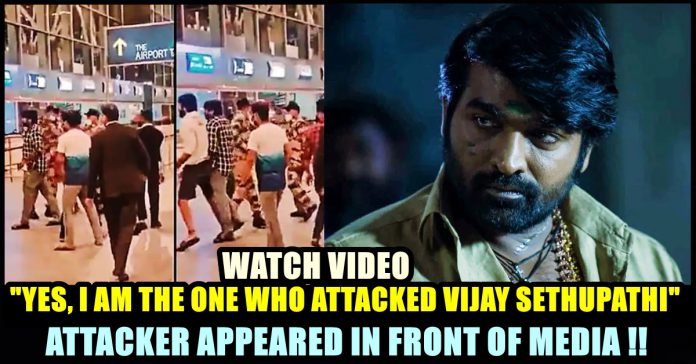 Days ago, a shocking video of actor Vijay Sethupathi getting attacked while being escorted by securities went viral across the social media platforms. The video showed a tall person kicking the actor while he was being accompanied by the securities in Bengaluru airport. The 6 second clip is trended with fans reacting in various ways. When questioned, Vijay Sethupathi issued a statement saying that it is just a minor altercation.

Now, an individual named Maha Gandhi appeared in an interview and said that he attacked Vijay Sethupathi after getting attacked by him or his aides. Gandhi said that he traveled with Vijay in a same flight and wished him for receiving national award. “Vijay Sethupathi asked me if this is a nation” Gandhi claimed.

Meanwhile, Vijay Sethupathi, in his statement to the media, said that the person who was involved in attack was in an intoxicated state and he couldn’t identify it due to the safety mask he was wearing. I never went out with body guards. I only have my friend who was my friend for 30 long years with me. I don’t like restricting people from meeting me. I always wanted to meet people and talk with them” Vijay Sethupathi said to the media.

In a span of 10 years, Vijay Sethupathi has gained a separate fan base for himself. He also got himself involved in a number of controversies. When the actor decided to play Sri lankan cricketer Muttiah Muralidharan in his biographical picture, a huge controversy took place among the Tamil speaking audience. Many who believed that Muttiah Muralidharan supported Srilankan government regarding the “Eezham” attack, demanded Vijay Sethupathi not to act in the film. As a result of the severe outrage that emerged against him, Vijay decided not to act in the film. Due to his public speeches where he asks people to believe in fellow humans instead of believing in a superior power, he started receiving hatred from a set of people. However, the actor is pretty much successful in his professional front as he is busy signing films for various production houses.